NCGOP Counts Its Four Eggers Before They Hatch 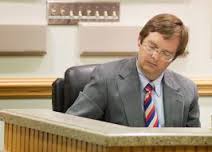 So ... you know that the special session rewrite of elections boards in NC got struck down by a three-judge panel as an unconstitutional infringement on the executive branch of state government.

You may not know that the Republicans in the General Assembly rejiggered that law (to pass constitutional muster, they think), which still strips authority from the governor. That Senate Bill 68 passed both houses of the General Assembly and is sitting on Governor Cooper's desk. Cooper has already announced that he will veto it, but he hasn't yet.

The NCGOP under Chair Robin Hayes isn't waiting. He's named his choices for the new State Board of Elections and Ethics, one of whom would be Stacy C. Eggers IV ("Four"), that Watauga County paragon of open elections and sparkling ethics.

Four Eggers -- on the State Board of Elections and Ethics.

The man famous in Watauga County for much malfeasance but most famous for this: "One County Attorney, Two Hats: Documents Show Attorney as "Author" Behind Key Resolutions."

The lawyer who worked non-stop for years to suppress the vote of Appalachian State University students.

Yes. That guy. The guy who forced Elections Supervisor Jane Ann Hodges into early retirement, who schemed behind the scenes with Paul Foley, and who got his brother Luke appointed to the Watauga BOE when his own nomination was rejected by the State BOE because of an obvious conflict of interest.

Of course, S68 will be passed over Roy Cooper's veto, but then it'll be back in court. So we figure that Four Eggers gets the publicity without the job. You're welcome!