Don't You Even Look at Him, You Peasants! 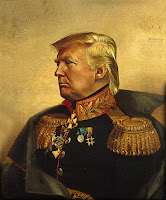 Donald Trump is arguing in a Louisville, Ky., lawsuit that he can't be sued for inciting violence against protestors because he won the election. No kidding.

"Immune am I, because I am king of all I behold," sez the man with the authoritarian left brain.

The Kentucky lawsuit was brought by three protestors who were roughed up at a Trump rally while the candidate himself barked "Get 'em outta here!" from the podium. Federal Judge David J. Hale has already ruled that Trump can be sued, despite his current gilding as POTUS. Judge Hale noted that speech inciting violence is not protected by the First Amendment ("free speech" was Trump's first line of defense) and ruled that there is plenty of evidence that the protesters' injuries were a 'direct and proximate result' of Trump's words.

To complicate things for Trump, one of his supporters, who is also being sued for assault at that same rally, has explicitly said he punched a woman protestor "in response to — and inspired by — Trump and/or the Trump Campaign’s urging to remove the protesters.”

Hmmm. Dunno about the merits of the case itself -- at this distance it looks weak -- but Trump's newest claim that he's immune from prosecution because he's the emperor is just so much buffalo dust.

Posted by J.W. Williamson at 4/17/2017 08:23:00 AM
Email ThisBlogThis!Share to TwitterShare to FacebookShare to Pinterest
Labels: Donald Trump