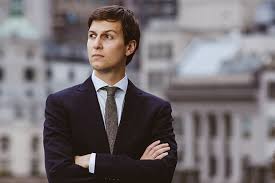 Back on January 10, ten days before the Inauguration, I wrote here that I had decided that the appointment of Jared Kushner to a White House job was something I considered hopeful, at a time when all hope seemed lost.

Kushner -- who may actually be an escaped upscale department store mannikin -- appears to be on the ascendancy in the Trump White House, with Steve Bannon in eclipse. Bannon lost his seat on the National Security Agency. Bannon opposes any intervention in the Middle East. Kushner's for intervening, which makes the Tomahawk strikes last night possibly some of his work.

Leaked details this morning of a verbal confrontation between Bannon and Kushner in the White House concludes: "Finally, Mr. Bannon identified why they could not compromise, according to someone with knowledge of the conversation. 'Here’s the reason there’s no middle ground,' Mr. Bannon growled. 'You’re a Democrat.' ”

The awesome warfare in the air of mighty competing powers. According to Maggie Haberman and her colleagues:


On one side are Mr. Bannon’s guerrilla warriors, eager to close the nation’s borders, dismantle decades of regulations, empower police departments and take on the establishment of both parties in Washington. On the other are Mr. Kushner’s “Democrats,” an appellation used to describe even Republicans who want to soften Mr. Trump’s rough edges and broaden his narrow popular appeal after months of historically low poll numbers.

Between Kushner and Bannon is the man in the Oval Office, who doesn't know what he's doing, who relies on first one and then the other of these competing forces, which produces chaos and uncertainty and horrible public policy. Better hope that Kushner prevails.