How Did Virginia Foxx Vote? 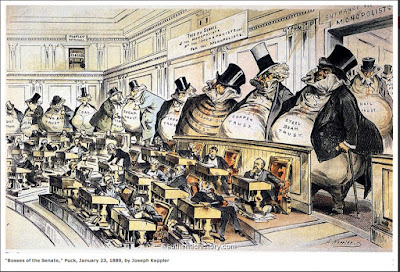 That didn't take long. Last night, in a secret vote, the Republican members of the U.S. House of Representatives voted to gut the independent Office of Congressional Ethics, which was set up in 2008 following congressional scandals. We don't know what the vote was, because it was secret. We don't know how Rep. Virginia Foxx voted, because the vote was secret, peckerheads!

It was a preliminary vote involving the rules that the majority Republicans can -- and will -- impose on the operation of the House. The package of rules has to be voted on again today in the full body. One wonders whether enough Republicans opposed the very bad "optics" of this move to join the Democrats in voting this down. We do know from inside sources that both Speaker Paul Ryan and Majority Leader Kevin McCarthy spoke against the motion.

Power breeds corruption. We've known all along that the Trump administration is likely to be the most corrupt in history, with more self-serving conflicts of interest than genes in the human genome, and now the Republicans in the U.S. House seem to be paving the primrose path to hell. We look for weak accountability over wrong-doing.

The Office of Congressional Ethics was established following a string of "bribery allegations against Representatives Duke Cunningham, Republican of California; William J. Jefferson, Democrat of Louisiana; and Bob Ney, Republican of Ohio. All three were ultimately convicted and served time in jail."

Instead of an independent agency conducting investigations, we'll now have the House Ethics Committee, a bi-partisan bunch which has been more than just reluctant in the past to lower the boom on corruption. They pussy-foot, because they're foxes guarding the henhouse, and the American public are the chickens.

Yeah, the House Ethics Committee wouldn't even do anything about Rep. Mark Foley's pedophilia. They're bringing back that era of hands-off ANYTHING a representative does.

WASHINGTON (AP) - House Republicans abruptly reversed themselves Tuesday under pressure from President-elect Donald Trump and dropped plans to gut an independent congressional ethics board. The dizzying about-face came as lawmakers convened for the first day of the 115th Congress, an occasion normally reserved for pomp and ceremony under the Capitol Dome. Instead, House Republicans found themselves under attack not only from Democrats but from their new president, over their secretive move Monday to neuter the independent Office of Congressional Ethics and place it under lawmakers' control. GOP leaders scrambled to contain the damage, and within hours of Trump registering his criticism on Twitter, they called an emergency meeting of House Republicans where lawmakers voted without opposition to undo the change.

Expecting ethics from politicians is like expecting virginity from prostitutes.

Oh Suzanna, maybe they could call it Foley's Law....

Seems you lefties keep coming up with new perversions to mainstream.

Hey moron, read an unbiased report of the bill:

"In his op-ed, Allen acknowledged that Democrats are "sincere in their belief that decriminalizing underage prostitution is good public policy that will help victims of sex trafficking." But he said SB 1322 is "misguided" because it would theoretically allow pimps who exploit children to continue doing so because the children aren't being adequately removed." from the above article.

Note that "Democrats are "sincere in their belief that decriminalizing underage prostitution is good public policy that will help victims of sex trafficking."

Decriminalizing it is the same as making it legal.

Later news:
Less than two hours after President-elect Donald Trump criticized House Republicans — in a tweet, of course — for trying to gut an ethics investigative unit on the first day of business in the new Congress, those plans lay in shambles in the Republican conference’s meeting room.

The immediate outcome was to keep intact the independent Office of Congressional Ethics — exactly the status quo that House Speaker Paul D. Ryan (R-Wis.) and his leadership team had hoped to protect. That result, however, appeared largely to be the result of Trump’s intervention rather than Ryan’s maneuvering.

Hahahaha! Did you see that Virginia Foxx is now bragging to the press that she voted AGAINST the original proposal to gut the Ethics Office. So glad to know that she felt the heat too.

Of course California legalized child prostitution. How moronic of me to read and suggest otherwise.