Worshippers Want To Know: What Does the Oracle Mean?

...the ACA has real problems [lots of ACA markets with too little competition and thus spiking prices], [but] it had its best year of sign-ups to date. It is demonstrably not failing and not a disaster. Indeed, it's gotten marginally more popular over the last few months, though that is likely because Republicans are now less invested in reflexively opposing it. The real bottom line number is that the latest polls show that only about a quarter of Americans want Obamacare repealed. A quarter!


Repeal of Obamacare without a replacement would be a disaster, and plenty of conservative voices are saying so. The AMA, which has opposed Obamacare from the beginning, came out today with a warning to Republicans in Congress: "policymakers should lay out for the American people, in reasonable detail, what will replace current policies." 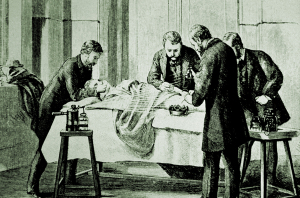 Those same Republican "policymakers" have therefore hatched a scheme to placate their insane base while not (ever?) producing a written replacement for Obamacare that would work: "repeal and delay." That is, repeal the goddamn thing right now this minute, with the proviso that the "repeal" doesn't actually go into effect until a date certain or the day the policymakers have come up with a way not to throw 25 million Americans off their insurance. In other words, approximately never.

The American Enterprise Institute, the mother ship of reactionary conservatism, called "repeal and delay" a "disaster" in the making.

Then PEOTUS Trump decided to throw some magic spice into this brewing stew, with the following three tweets this morning:

Donald J. TrumpVerified account‏@realDonaldTrump
Republicans must be careful in that the Dems own the failed ObamaCare disaster, with its poor coverage and massive premium increases......

Donald J. TrumpVerified account‏@realDonaldTrump
like the 116% hike in Arizona. Also, deductibles are so high that it is practically useless. Don't let the Schumer clowns out of this web...

Donald J. TrumpVerified account‏@realDonaldTrump
massive increases of ObamaCare will take place this year and Dems are to blame for the mess. It will fall of its own weight - be careful!

If you understand what any of that means, you should apply to divination school. (I hear there're openings.)

"It will fall of its own weight -- be careful!" That could be interpreted as "do nothing, Peckerheads!" "Get out of the way and let it fail"? Is that what he means?