BREAKING: New Explanation for Why Virginia Foxx Walks That Way 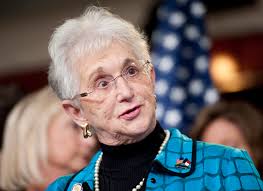 People are talking about the leaked recording of Congressional Republicans arguing about Obamacare at their retreat Thursday morning. We find it especially compelling for the participation of Congresswoman Virginia Foxx.

Thursday morning in a private meeting, some Republican lawmakers expressed high anxiety about repealing Obamacare too quickly and without a viable option that doesn't throw millions off their health insurance, or costs them more in the long run. Like House Rules Chairman Pete Sessions (R-Texas): “I hate to think we’re going to keep going down this road that says, ‘You have to do it [repeal] now! Now! Now! Now! Now!,’ and then wake up and say, ‘What did we do?’ ”

Virginia Foxx, The Spirit of Christmas You're Never Going To Have, couldn't stand it. According to Politico, which received the leaked tape and listened to it, Foxx scolded Sessions and MacArthur and any other sob sisters: “I couldn’t believe a week or so ago that I heard there were people getting weak-kneed on the repeal. My, God! We all ran [on] repealing Obamacare! What is wrong? ... Sometimes people don’t have enough backbone to do what they’re supposed to do and you need to put a broomstick up their back.”

Politico chose to paraphrase what she said next:


...she suggested she’d do that herself to Republicans who don’t vote for their Obamacare replacement.

Politico added, "everyone laughed," I guess because they needed to break the tension, plus Foxx's saying it as a joke reinforced her role as unpettable House Republican mascot, the mean little ole lady from Appalachia.

More than that, we assume Foxx was confessing that she has a broomstick up her ass, presumably put there by her mother, and she won't be happy until everybody else has one too. She's a socialist like that.

Posted by J.W. Williamson at 1/28/2017 11:21:00 AM
Email ThisBlogThis!Share to TwitterShare to FacebookShare to Pinterest
Labels: health care, Virginia Foxx

She got where she is today by lieing on her "backbone" after lunch, in the office of the Dean of the General College, for whom she was secretary, at Appalachian State U. She had better "get right with God", because there were witnesses (co-workers) other than He.