Where There's Smoke, There May Only Be Someone Farting into the Wind 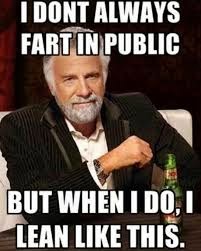 More excellent evidence that the sudden eruption of "voter fraud voter fraud" in North Carolina last week (check out the Watauga Conservative for just one example of hyperbolic face-fanning) was nothing but politically motivated stampeding of the voter suppression wildebeests.

Chris Fitzsimon's "Monday Numbers" this morning points out that Republican General Assembly leaders Thom Tillis and Phil Berger rushed out their allegations about massive voter fraud on the basis of unproven, incomplete, and inconclusive investigations by the State Board of Elections, based on the monumentally inept suspicions of the Kansas Secretary of State, who has a long history of passing gas in the general direction of people actually voting, which conservative Republicans so obviously despise.

The Kansas Secretary of State created the Interstate Voter Registration Crosscheck Program, which is what turned up the 765 North Carolina citizens who may (or more likely may not) have voted twice, in this state and some other state, the allegation or implication of which sent Tillis and Berger screaming at the rafters.

Farting into the wind:

17—number of alleged voter fraud cases identified by the Interstate Voter Registration Crosscheck Program in Colorado in early 2013 and turned over to the Boulder County District Attorney’s Office (Ibid.)

17—number of the 17 alleged voter fraud causes found in Colorado that were dismissed in July 2013 after the District Attorney found that none of them involved actual fraud and that the allegations were “politically motivated.” (Ibid.)

How 'bout you howling monkeys in the Republican Party let us know when you actually find any actual evidence of voter fraud, especially any species of voter fraud that would have been prevented by your hallowed voter photo ID law.

Posted by J.W. Williamson at 4/07/2014 08:13:00 AM
Email ThisBlogThis!Share to TwitterShare to FacebookShare to Pinterest
Labels: North Carolina Board of Elections, Phil Berger, Thom Tillis, voter suppression