The Premature Ejaculations of Tillis and Berger 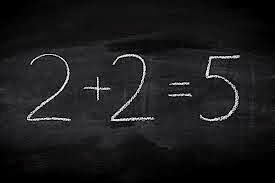 Re: This High Country Press article

Thom Tillis and Phil Berger claim voter fraud? Let's think about this with some common sense and some basic math skills, shall we?

Fact: 765 NC registered voters had the same first name, last name, DOB, and last 4 digits of SSN as someone in another state.

The Republican talking point/implication: These 765 people committed voter fraud by voting in NC and in another state!

In the past, when these anomalies arise, it almost always turns out to be a mistake somewhere; for example, some well-intentioned Board of Elections worker simply got the DOB wrong or the SSN wrong. I've certainly made this mistake before, as likely you have. And the new voter photo i.d. legislation Tillis and Berger passed can't do anything about these kinds of errors. These are human errors regardless of whether you show a state-issued photo i.d. or not.

But let's tackle the Tillis/Berger claim directly with some analytical skills that our NC youth learn while they are in school (although perhaps Tillis and Berger didn't!).

#1 -- The Geographical Analysis
There is a key assumption in this claim of voter fraud: that these 765 double entries are the same person voting in two states. But notice that they did not dig deeper to see if they could physically be the same person. (My elementary school math teacher called this "making sure your answers make sense.") While someone may be able to drive from their poll site in NC to some poll site in SC or VA or TN, it would NOT be possible to vote in Alaska or Oregon. The data needed to answer this is, of course, available. But was that analysis done? Doesn't seem so, but then why ruin a great headline like "Voter Fraud" with prickly facts?

#2 -- The Probability Analysis
You should not believe that the same first and last name alone would indicate voter fraud! There are just too many John Smiths out there, right? For fun, look at HowManyOfMe.com, and you'll discover that there are 46,000 John Smiths in the U.S.! When any middle name does NOT get factored in, that means that John W. Smith and John A. Smith are being considered the same person by this analysis.

Okay, but throw in the same DOB, and it really becomes convincing that this is voter fraud, right? That this must indeed be the same physical person. Except that probability theory (Google "birthday paradox") says there is a 50% chance of two people having the same birthday in a group of only 23 people! If we divide our 46,000 John Smiths into groups of 23, we get 2,000 groups, and about half of these groups will have two people (both named John Smith) with the same DOB.

But put it all together and surely the odds become astronomical and thus prove this data has identified the same physical person committing voter fraud. By my rough calculations, in a room of 2,250 people there is a 50% chance that two will have the same DOB and last 4 SSN digits. So let's get our John Smiths (all 46,000 of them) into these groups of 2,250 each. That makes 20 groups, and so there are about 10 John Smiths with the same DOB and the same last 4 SSN digits.

Wow! I bet that if Tillis and Berger dig deeper they might even find some of those 765 persons supposedly voted not only in NC and one other state but possibly in even more states. They might even find a John Smith who voted in 10 states! Or they might find that these are not the same physical persons after all.

#3 -- The Superlative Adjective Analysis
Tillis and Berger are claiming that these 765 sure cases show "alarming evidence" of voter fraud. I call your bluff on the word alarming. I've already shown that there are most assuredly NOT 765 cases of voter fraud. But what if there were? Would it be an "alarming" number? One that required immediate action? Let's see: There were about 4,500,000 NC residents who voted in 2012. And 765 divided by 4,500,000 = 0.00017, which is one HUNDREDTH of one percent. Alarming? Consider a different context: If I weigh 200 pounds and want to lose some weight with a new diet, and then lose 0.017% of my weight ... wow! that's 0.034 pounds or 0.544 ounces or 15.4 grams.  That's about the same as a ball point pen. Yeah, not that impressive after all.

I truly look forward to the deeper analysis of the NC State Board of Elections, but I'm not holding my breath because I don't believe that either Tillis or Berger really care. They've done their grandstanding with their weak set of facts and want to move as quickly as possible away from any real truth.

So what I want to know is why they aren't prosecuting voter fraud rather than just trying to make it harder for honest people to vote? I have no doubt that there are people who have two homes who vote in two places. But there are no restrictions being placed on this type of person. Only poor, young, Democrats, blacks and others who would not vote Republican.

Your numbers are wrong. You might want to go over them again.

The study says these people (same first & last names, birth date, and last 4 digits of the SSN) vote in NC and another state in 2012. If I'm reading the report correctly, it sounds as if some people voted in the NC primary, then moved (graduated, perhaps? got a job and moved after the kids finished the school year?) and then voted in their new state in the November elections. Last I checked, that isn't fraud.

And of all the hundreds of similar "cases" referred for investigation in other states after the same matching process, NOT ONE has actually been found to be fraudulent and been prosecuted.

Good analysis, Jerry. I might add to point #3 that if there were 765 cases of voter fraud, statistics say they would be spread equally across both parties, effectively nullifying each other. So the already insignificant .017% of voter fraud is even less than that.

Sadly, none of this matters. The NC BOE has achieved what they wanted to achieve. They have convinced the uncritical Republican mind that 35,000 Democrats double-voted in the last election ... that Romney won.

Anonymous. Your brilliant and mathematically penetrating analysis proves why the NC BOE can publish outrageously false reports and know its minions will uncritically believe every word. Soldier on.

Winning ugly! It's the NCGOP way.

whatsisname....apparently you are ready to believe an error filled analysis consisting of bad math and misdirection. I suppose as long as it fits your thesis that there is no voter fraud, you would accept analysis put before you.

Ask yourself however, if there are, ass alleged by the op, 100,000 individuals sharing each of the possible last 4 digits of their SSN's, then how many total SSN's would there be?

Now, ask yourself what the population of the US is....

Finally, how many SSN's would EACH person in the US have to have in order to equal the number claimed by the OP?

hint...divide the population into the total number of SSN's found in the first exercise.


Conclusion. The intelligent few among you will see that the analysis by the op is flawed. And, that having disproven a part of the formula, then the entire equation fails.

The majority of you will, of course, continue to believe what you have been conditioned to believe and thus deny the facts presented to you.

Perhaps, anon 2:06....the GOP is opposed to voter fraud no matter who may benefit.

That's probably a difficult concept for you to understand.

That's what I can't understand either. If Democrats are indeed perpetrating voter fraud, then they must suck at it - how on earth did the Republicans win the governor's mansion in the face of this massive fraud???

Voter ID wouldn't stop a person from voting in multiple states. Condensing early voting would not, either. The GOP way, apparently, is to make it as hard as possible to vote.

To Boo Radley, it remains hilarious the party that benefitted from voter fraud is now opposed to it.

"By any means necessary!" Malcolm X is the perfect voice for today's GOP….