This Man Is a "Bought" Judge 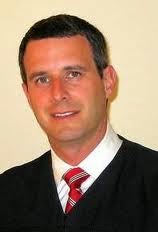 Mecklenberg Superior Court Judge Eric Levinson is running for a seat on the NC Supreme Court, and he's being backed by Koch brothers money, among other big corporations.

Not that those "dark money" sources are promoting Levinson. No, they're tearing down the sitting incumbent Robin Hudson, who's running for reelection and who's being smeared every 15 minutes on TV as "soft on child molesters."

Scott Moneyham got to the truth of the matter yesterday. The damage that Koch money is doing to Robin Hudson is nothing compared to the damage they're doing to the entire judicial system in our state: "By bringing highly-charged partisan politics into these races, the real losers are the people of North Carolina. These ads encourage judges to decide cases based on partisan political considerations, and not fair interpretations of the law and constitution."

If Judge Levinson were interested in justice and not in personal advantage, he'd already have denounced the attacks on Hudson. If he makes it to the high court, he can sit with that other judicial "merchandise," Judge Paul Newby, who got his seat similarly bought for him in 2012.

Those guys are not put on the bench to render justice. They are there to render unto Caesar.

I'm all for much tougher sentences for child molesters. But the Koch Brothers ads are attacking Hudson for voting (with the majority) against a decision that would have been a direct violation of the ex post facto clause of the FIRST ARTICLE of the U.S. Constitution.