...three men in a tub, and they all sailed out to sea.

The three-man Republican majority on the Watauga County Commission formed a belt line last night and whipped the dickens out of Boone Mayor Andy Ball for having the gall to ask that sales tax distribution to the four towns in the county be returned to a more equitable per capita (population) basis rather than the current ad valorem (property value) basis.

Commissioners Nathan Miller, David Blust, and Perry Yates trotted out their lists of past beefs with Boone, their grievances, their grudges going back decades in some cases, but they readily admitted that their self-righteous spite sprang mainly from the on-going feud Mr. Yates's daddy-in-law Phil Templeton has with anybody and everybody who won't let him do precisely as he wishes as a millionaire land developer.

How dare the Town of Boone let its concern for maintaining development standards get in the way of Mr. Templeton's offer to buy the old high school property for $19 million! Well, Boone dared, and the three men in Nathan Miller's tub exacted their punishment: the redistribution of sales tax revenues so that Boone is hurt to the tune of almost $2 million, while the other three towns get a windfall.

Make that "a windfall" with a kick-back provision for the county: the three other towns get to keep 40% of their new sales tax allocation while kicking back to the county a whopping 60%. A gentlemen's agreement, so to speak (and begging the pardon of actual gentlemen everywhere). Everybody is making out like bandits, except Boone.

What's not to like about that? Government by revenge. The "social contract" as vendetta.

No one disputes the fact that Boone raises over 60% of all the sales taxes collected in Watauga. After Miller/Blust/Yates meted out their punishment last year, Boone now receives back some 12% of that revenue to support its budget. Before, when the distribution was based on population, Boone received between 24% and 25%. With four towns in the county, the largest and most productive, as far as sales tax revenue goes, was receiving one-fourth of those revenues, while raising most of it. Seems fairly equitable that one-fourth of the towns would get one-fourth of the revenue. 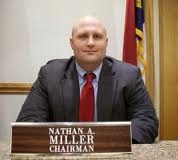 Last night, Mayor Ball asked Commission Chair Nathan Miller if he thought it was fair that Boone raise 60% of the revenue and get 12% of it in return. You could see the ire rise in Miller. It's plenty fair, he replied with noticeable venom.

(It's still remarkable to me that a man of this temperament, with this understanding of balance in the world of justice, is now seeking to become the District Attorney for the 24th Prosecutorial District. A prosecutor ready to ride a grudge into the ground.)

Last night, and with something of a rhetorical flourish, Commissioner David Blust asked Mayor Ball if ASU students wouldn't be included in any per capita calculation, as if to suggest... what? Mr. Blust never finished that thought. We assume he was implying something nefarious -- he has a history of malice-afore-thought toward ASU students. Perhaps he was suggesting that college students in the town of Boone aren't actual, "legitimate" residents, even while they drive our streets, walk our sidewalks, drink our water, and put great strain on our infrastructure, and even while they add tremendously to the grand total of sales tax revenue that Mr. Blust willfully denies the Town of Boone.

Anne Marie Yates, Commissioner Yates's wife and Daddy Templeton's daughter and incidentally the chairwoman of the Watauga County Republican Party, was doing a victory lap out in the lobby with leaders of the other towns. Ms. Yates was unable to get her slate of family and friends elected to the Boone Town Council last fall, but obviously the next best thing is to enjoy the suffering of the powerless.

It's ironic that you cite David Blust's historical contempt for ASU students given he and his wife own at least one student-slum housing complex. The place looks sorely under maintained and that's putting it nicely.

Bless Mayor Ball's heart for making the request forcing them to reveal their malice and self-guided interests as our government representatives. Mayor Ball knew what the answer would be but he put it before them anyway. Smart move on his part and I hope he continues to do so and the local papers continue to report on these exchanges. Mr. Miller's math is obviously fuzzy so why wouldn't he bristle when called out in public about the fairness of the tax structure? He doesn't have a decent leg to stand on.

My only question for NC voters, Watauga voters and Boone voters specifically is "why do you keep voting against your own financial interests?" These people, Miller, Yates, Blust, Templeton, Fox, Soucek are the living embodiment of the southern "Boss Hog" stereotype. Vote these folks out of office ASAP and certainly don't allow Boss-Hog-Miller into the office of District Attorney. The guy has shown himself to be a slime-ball. This is not the kind of representation I want in our local government.

When will the SBI step in to examine the multiple conflicts of interest between the Republican party, the developer in chief, the County Commission and the local voter suppression efforts? A small group is driving it all. NC is supposed to have a strong ethics law, or that' what Mr. McCrory claimed. The US Attorney is investigating Chris Christie for retaliatory actions which are much less obvious while Mr. Miller brags about using his official power to punish Boone. But nothing happens. Where is the investigation? Where is the outcry? Why do the Republican sheep who run and write for the Watauga Democrat, do a little investigative reporting about Watauga County corruption?