First They'll Celebrate the "Fraud," And Then They'll Check for Evidence 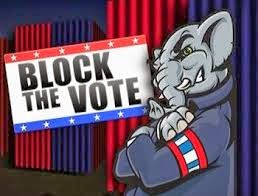 Republican members of the General Assembly were joyously leaping to conclusions yesterday about massive voter fraud because a computer program found people with the same name and birth date supposedly voted in two different states of the union.

Kim Strach, executive director of the State Board of Elections, kept reminding the lawmakers that nothing was proven yet and that they shouldn't leap to conclusions. But the lawmakers were making like hot popcorn kernels and were hitting the legislative pot lid plink plink plink.

Congratulating themselves for passing Voter ID law and General Voter Suppression measures last year they were!

But here's the thing: The Republican Voter ID law would not -- NOT -- have prevented a single instance of double-voting in North Carolina and, say, Vermont (if it happened at all).

Our legislative Republicans and their enablers are such transparent cheerleaders for "It's My World and You Should Just Get the Hell Out of It!"

Posted by J.W. Williamson at 4/03/2014 11:10:00 AM
Email ThisBlogThis!Share to TwitterShare to FacebookShare to Pinterest
Labels: North Carolina Board of Elections, voter suppression, voting rights