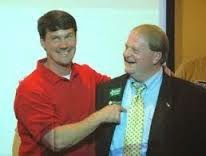 1. Failure to expand Medicaid under the Affordable Care Act, which would have cost the state nothing for the first two years and only 10% after that.

Next door in Wilkes County, 512 citizens could not get health insurance coverage because they make less than $11,490 a year ($23,550, for a family of four). They could be covered by Medicaid, but Governor McCrory and the Clown College cut off that option in their spite against President Obama.

2. Yesterday in Wake County, we found out that over 600 public school teachers have resigned since last July, many of them in frustration and in mid-stream, because of the way the Governor and the General Assembly have exhibited their spite toward public education.

Probably many of you reading this personally know a school teacher who has quit in the last nine months and moved on. I do. She's now working in Tennessee for substantially more money.

The Wake County resignations are 41% higher than last school year, an "alarming" statistic that has school administrators across the state concerned about the "brain drain" and a resulting teacher shortage.

Congratulations, NC Republicans! Your rancid and reckless ideology is driving North Carolina into a hole that will take decades to get out of.

Dan Soucek and Jonathan Jordan: You have direct responsibility for this pain, all of it!

Yes, ObamaCare is failing for a lot of reasons. The refusal of half of our states to go further into debt to support a federal giveaway is but one of many reasons.
It's too bad though. As we all know, federal money is "free" and doesn't cost anybody anything.

But this was the point. Destroy public education so they can point and say, "See? It doesn't work!" and then let their buddies in for-profit education take over. Like the folks who paid for Soucek do take a junket to Florida to see the for-profit stuff going on there in education. Like the folks who make money off the tests that our 3rd graders take THREE TIMES A WEEK all year long.

Anon 10:22, taking free federal Medicaid money to give health care for a half million of your citizens should have been a no brainer, even if three years down the road that money would drop to 90% instead of 100% of costs. Debt is an excuse, not a reason. The real reason not to take it is ideological: it's more important for the GOP to suck up to the rich than to care for the poor. This is of course exactly anti-Christian, but the party powers-that-be have hoodwinked a lot of voters into thinking it's more important to get all exercised about abortion and gay marriage (about which Jesus said exactly nothing) than it is to follow His explicit teachings about caring for the poor and needy. Money that should be going to health care and education is instead being shoveled to the already-wealthy in our state.

Anon 10:22, ObamaCare is not failing at all. You are mouthing tea party propaganda that simply is not true. No one has lost their "affordable" medical coverage because of ObamaCare. Yes it has its flaws but its a step in the right direction. You need to lay off the Fox-News-KoolAid and seek more diverse news sources.