Everything You Need To Know About the Watauga GOP, in One Convenient Package 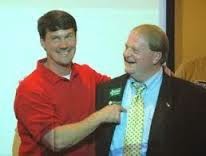 The High Country Press got hold of the texts of the resolutions passed at the Watauga County Republican Convention last Saturday.

The resolution on education alone is jaw-dropping in its complete failure to recognize the destruction done to public education in North Carolina under two successive Republican state budgets. It actually praises Rep. Jonathan Jordan and Senator Dan Soucek for their votes on education, but in Republican World those votes don't seem to include making North Carolina 46th out of 50 states in teacher pay and the firing of hundreds of teachers and teacher assistants across the state.

But, wait! No praise therein for book-banning? There's an oversight!

The document properties of the originals would possibly reveal much about who really runs that party.

This one is a matter of concern: "Stand in opposition to Common Core education standards." This relates to the censorship issue, I believe. It appears that right-wingers are trying to destroy Common Core standards even though those standards are quite modest and uncontroversial. Apparently the belief that the big national government is trying to destroy local control over schools.

It appears that they want Christians to push their way into imposing their standards in local school systems.

Gotta love the math in the Resolution on Voting Site Selection. Let's see, "66% live outside the Town of Boone" so it logically follows that most residents in Watauga County are therefore 'rural' - seriously?! When one has a Boone 28607 mailing address, even if not residing in the municipality, you are not a 'rural' resident. Census data - seriously?! What happened to looking at the voter rolls - you know, those that are registered to vote. The truth is, once again, just the opposite of Repug claims. At least 2/3 of the registered voters live in Boone and the immediate surrounding precincts.

The GOP also passed its resolution in favor of the sales tax redistribution which took $2 mill of Boone money and gave it to Beech Mountain!, Blowing Rock and Seven Devils (at least until the county attorney and attorney for Beech - oh, wait - they're the same guy - negotiated with themselves to kick back some of it to the county). Any Boone resident who votes for a Republican for the county commission is voting to raise his own taxes since now property taxes will end up being raised to make up the loss.

According to the "logic" of anonymous 7:18 then, any Blowing Rock, Seven Devils or Beech Mountain voter - or any voter in the unincorporated areas of Watauga County, who votes for a Democrat is voting for a tax increase?

Love Dem Logic! Sort of like anon 722's logic that a 28607 zip code means one is not a "rural resident". ALL of Watauga county except those communities with their own post office and ASU PO boxes have the same 28607 zip code.

Are Dems stupid? or just liars?

What I like most about the sales tax resolution, is that the Republicans finally admit that it served the primary purpose of punishing Boone for trying to protect the lives of its citizens. Wouldn't want that. Especially since it interferes with the plans of their biggest donor, who now seems to control it and about everything else in this county.

I guess anonymous 9:16 forgot to point out that the towns which benefited by the malicious action of the county commission on the sales tax are all controlled by Repubs. Pure and simple partisan politics at the bidding of the big money interests which control the GOP locally, statewide and nationally. The party of the rich! Nothing more. When future generations scratch their heads to try to figure out how people of this era destroyed the environment, the answer will be simple. GOP = corporate interests = big money = environmental degradation - it stands in the way of making money. Just look at the anti-environmental anti-steep slope resolution of the local band of anti-evironmental corporatists. It says it all.

Anonymous 9:16 - I said BOONE resident - not to be confused with other perfectly fine locations outside of Boone - Meat Camp, Deep Gap, Foscoe, Blowing Rock, Sugar Grove, Bethel, Matney, etc. While these are lovely places to live, there just aren't the number of registered voters in these areas as in the 8 precincts in and immediately adjacent to the Town of Boone. That's where the vast majority of registered voters in the County actually reside. The Census data the Republicans referred to, quite conveniently, only includes residents of the municipality of Boone and ignores any who reside in the areas immediately adjacent to the Town limits. Those are the facts.

Those local GOP leaders who say they oppose steep slope regulations and landslide hazards from being made public need to look at recent news from Washington State where similar historic landslides had taken place. http://www.huffingtonpost.com/2014/03/29/washington-landslide_n_5054968.html

There are many, many people who live within 1 or 2 miles of the city limits of Boone. I'd like to see some numbers on that! Also, I find it funny that the Republicans specifically mentioned the Foscoe fire department in making their case for "rural voting," but they eliminated that site this year!

"Are Dems stupid? or just liars?"

Just because one person made a comment on a blog doesn't mean that ALL Dems think that way! How do you know that the poster is a Democrat?

Boone residents have a local early polling place. There is no problem.

Actually, Boone residents can vote early in any one of the polling places. Whichever one is most convenient. Thanks to our local election board there should be a polling place available within a couple of miles of EVERY voter!

"Thanks to our local election board there should be a polling place available within a couple of miles of EVERY voter!"

Looking over the Republican resolutions, isn't it curious that most of them are anti-Boone and all of them reflect the personal interests of the Templeton family? What a coincidence. I read in the W. Democrat that Jeff Templeton said all affordable housing problems in Boone would be solved if it just repealed it steep slope ordinance, tree ordinance, family style housing ordinance, and requirement that apartments provide open space. Welcome to the Soviet Union or Bejing - cement block towers jammed next to each other, can't see the sky, no grass or trees. That's inviting!

That's what I don't understand about the Templetons. If they hate Boone so much, then why don't they go build their developments in West Jefferson or Newland or Spruce Pine or some other town that is run by Republicans? Companies from "off the mountain" build things in Boone all the time, so the Templetons could go buy up land in other counties and towns. There's no law that says that they HAVE to confine their activities to Watauga County.

There's no law that says that they HAVE to confine their activities to Watauga County.

But there is law that they can do business in the County if they want to. The problem is that the Town does not follow its own rules when it comes to them.

Why do you folks continue to attack the Templetons? Is it because you resent their success? Templetons have probably employed more locals and probably put more money into our local economy than all of you whiners combined.

"The problem is that the Town does not follow its own rules when it comes to them."

Example, please? Sure, they are free to build things in Boone if they like, but they have to play by the town's rules, just like in every other town and city in the state.