Does Buncombe Have More Drama Than Watauga? 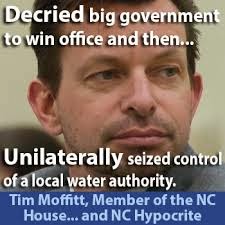 You be the judge.

This could supply a full season's scenario for "The House of Cards."

You've got a dewy-eyed and reportedly naive Democratic challenger and a shiv-wielding Republican incumbent by the name of Tim Moffitt, who's angling to replace Thom Tillis as Speaker of the NC House.

You've got the back room of an Italian eatery.

You've got a third-party witness who's also a Republican office-holder and hardly to be credited as an unbiased commentator.

Every bad thing that happened legislatively to Asheville in 2013 can be traced straight back to Tim Moffitt.

Posted by J.W. Williamson at 3/14/2014 08:41:00 AM
Email ThisBlogThis!Share to TwitterShare to FacebookShare to Pinterest
Labels: Asheville, Buncombe County, Tim Moffitt

Wow! So Tony Soprano has moved to Asheville and join the Republican Party!