Sunlight Is the Best Disinfectant 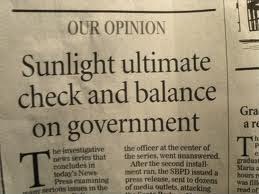 A federal judge ordered NC state lawmakers yesterday to hand over emails and other documents related to the enactment of the controversial and comprehensive new ballot-access law passed last year which requires voters to show photo identification at the polls, limits early voting times, ends out-of-precinct voting and same-day registration, among other provisions. Republicans called this new law "the voter integrity act." We call it voter suppression.

Republicans in the General Assembly have been hiding their thinking behind this new law and refusing to turn over documents, claiming absolute legislative immunity from "discovery."

U.S. Magistrate Judge Joi Elizabeth Peake wrote in the decision that legislative immunity must be evaluated "under a flexible approach" that balances the public's right to know and the legislative process.

"The Court concludes that, while the judicially-created doctrine of 'legislative immunity' provides individual legislators with absolute immunity from liability for their legislative acts, that immunity does not preclude all discovery in the context of this case," Peake wrote.

"Our representatives" will just appeal to the federal court of appeals, stacked with Reagan and Bush right-wingers, and if they manage to lose there, SCOTUS, which is at this point little more than a group pretending to be "Justice" but actually controlled by the same sponsors (read the Koch brothers) as Congress and the NC legislature.