Watauga Board of Elections: The Fix Is In 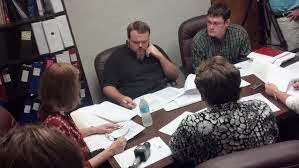 Yesterday, Chair Luke Eggers and his fellow Republican on the Watauga County Board of Elections, Bill Aceto, held a ... meeting? gathering? get-together? where they purported to listen to citizens about an Early Voting plan for Watauga. The vast majority of those citizens in attendance were there to argue that there needs to be an Early Voting site in the Appalachian State University Student Union, but their opinions don't matter. There will never be an Early Voting site in the ASU Student Union as long as Eggers & Aceto are in control of Watauga County voting.

Whatever else it was, the confab yesterday was not a public hearing, as there were no speaker lists, no record kept, no notes taken, and everyone in that milling, chaotic crowd could not hear the comments of everyone else.

It was all fake anyway. Eggers and Aceto have no intention whatsoever of putting an Early Voting polling place on the ASU campus, because when young people are encouraged to vote in Watauga, Republicans lose, and Eggers and Aceto are, above all else, partisan Republicans. They are also under the thumbs of Republican County Attorney Stacy C. Eggers IV ("Four") and Republican Party Chair Anne Marie Yates.

Eggers and Aceto are also boxed in by new North Carolina voting laws which mandate that Early Voting hours have to equal the same number of hours offered in 2012 even though the Early Voting period has been reduced by a week. To achieve those numbers while singling out ASU students for discrimination will cause them Olympic-worthy gymnastic stretches and considerably more money in staff salaries.

I'm all for Early Voting in Deep Gap, Foscoe, Cove Creek, Blowing Rock, Meat Camp. Absolutely! Let a thousand polling places bloom! But all the rural precincts combined equal maybe 30% of registered voters in the county. Greater Boone, which includes the ASU campus, accounts for over 60% of registered voters. But the 60+ percent majority are about to be actively discouraged from voting by the strategic and partisan relocation of Early Voting sites away from the center of population.

Eggers and Aceto have to do it to satisfy their masters. After all: there'll be a hot sheriff's race in Watauga, and the Republican candidate is going to need every partisan advantage he can snag.

It they cared what the public prefers, they would have asked a staff member to tally the number of requests for various options and would have asked each person to use a microphone so that others could hear.

What a waste of time that was last night!

It's not too late for them to prove you're wrong. Let's see if they do!

True, though 2/3 of the voters live in and around Boone, 1/3 out in the county. But the proposal made by one member of the BoE is for early voting in the county AND at 3 places in Boone to accommodate all the cars and voters there...based on where voters live and where is most convenient for EVERYone.

If any voting poll is open, then they all should be. If not, then some people get an advantage. Until this happens there shouldn't be any early voting.

I live in the county, but work in Boone every day. It' such more convenient for me to vote in town where I work, rather than drive out of the way on a work day.

"I live in the county, but work in Boone every day. It' such more convenient for me to vote in town where I work, rather than drive out of the way on a work day."

And that's what our other dear Anonymous above just doesn't get. Many, many people who live out in the county come to Boone every day to work. It's actually convenient for them to vote in Boone, as well.

Anonymous, You seem to believe that helping others is the same as hurting you. Not so. In this case specifically, by providing plentiful early voting sites in town, crowds and lines are reduced at the county sites on election day.

If one poll is open then they all should be.

This is certainly true (not an opinion) when others are given preferential treatment.

The courthouse is a convenient location for Boone voters. Record turnouts in 2013 municipal elections have proven that to be the case!
Let's be honest here. Neither side is being truthful- the fact is that each side wants the early voting sites to be located where they would most favor their candidates.

"If one poll is open then they all should be."

Do you mean every precinct polling station that is open on election day should be open during early voting as well? I don't think that would work. It's fine to close a school or a fire department for ONE DAY for voting, but you couldn't do it for 2 solid weeks. I support early voting, but logistically speaking it's not practical to have every polling station open. We should have one in Deep Gap, one in Blowing Rock, probably 2 (at least) in the western part of the county, and 3 in Boone to accommodate the larger population. This is not giving "preferential treatment" to anyone.

A place in the student union wouldn't be so bad if the local dems and the asu dems didn't harass everyone walking through to vote. A lot of students said that they voted just to get this bunch of idiots to stop pestering them everytime they walked by. Make all the crap eating poll workers stay away and lets see exactly how many vote.