Nothing Focuses the Mind Like a Federal Criminal Investigation 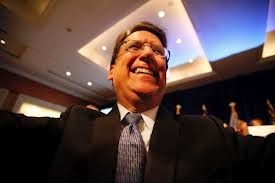 Looks like Governor Pat McCrory, a former Duke Energy executive and current Duke Energy cuddler, is trying to look as though he's getting right with Jesus. Yesterday, he publicly called on his former employer and current major political contributor to move its coal ash ponds away from water sources.

Those were words, of course, not action. Action would have involved McCrory's top guy at the Department of Environment and Natural Resources, John Skvarla, actually taking tough steps against Duke Energy to keep our water clean. So far that action has been sorely lacking.

But now the Feds have opened a criminal investigation, and McCrory needs to look like something other than a creature owned lock, stock, and leaking ash pond by Duke Energy.

Skepticism about McCrory now runs deep in North Carolina, since he's rarely risen above sock-puppet status during the past full year. Said Frank Holleman, senior attorney with the Southern Environmental Law Center: “I think it’s good the governor is reacting finally and is communicating with the CEO of Duke Energy, but given everything that’s happened, actions speak louder than words. He says they’re not going to stand for it anymore, but if you’re not going to stand for it any more, clean up the mess.” (Emphasis added, natch!)