Dan Soucek: He Gone Iron It Out! 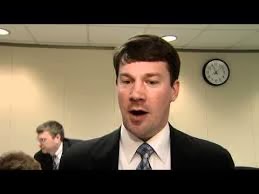 Republicans think they have the "fix" for calming down the state's teachers and winning their votes this November: Stage a big, splashy roll-out of a program to "increase teacher pay" and hope that nobody notices the small print and the continuing wholesale disrespect that veteran teachers must suffer at the hands of this governor and this conservative Republican regime in the General Assembly.

And then Senator Dan Soucek opens his mouth.

"There are a lot of other ideas out there we're still trying to iron out," Senator Soucek told Anna Oakes of the Watauga Democrat. "We'll come out with more information as we know more of what we can do. We don't know what the impact Medicaid and Medicare are going to have. That's a wild card that affects everything."

Ironing out those wild cards! That's what Senator Soucek is so goldarned good at! And nice going, Senator Soucek, stepping "off message" like that and hauling in Medicaid as a potential excuse for not treating our teachers with respect, so that you can eventually blame everything on Obama, right?

Senator Soucek, it was your side that rejected the federal dollars for Medicaid expansion. It's your side that created the last two state budgets that squeezed the living crap out of our dedicated veteran teachers. Why, it's almost like you ironed them flat! And now you're trying to reinflate their sense of well-being with some phony, empty rhetoric.

About this purported "teacher pay raise," Gary Pearce posted this morning, "What kind of company would give a raise to its newest, rawest employees, but stiff its most experienced, capable people?" Why, indeed! Does Mr. Soucek think the teachers in his district are as dumb as he continually proves himself to be?