Last Night, With the Watauga School Board 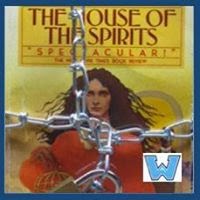 By a concerned citizen, guest blogging:

Last night at the climactic conclusion of the months-long furor over whether high school Honors English sophomores would be allowed to read Isabel Allende's The House of the Spirits, the Watauga County Board of Education gave 30 minutes each to both the complaining parent, Chastity Lesesne, who started all of this, and the English teacher under attack, Mary Kent Whitaker.
As I listened to the book challenger speak, all I could hear was the implication that she believed her standards for decency should be imposed on everybody. She listed all of the school's regulations about decency -- what books, language, movies, etc. would be acceptable -- and reminded us repeatedly that this book doesn't meet any of those standards. She read a definition of pornography ("material that is intended to cause sexual excitement") but continued to describe parts of the book that create disgust rather than sexual excitement. Time after time, she said the book is pornographic despite the fact that nothing in the book is intended to cause sexual excitement. She read a passage that described a dirty old man's fantasies as he took advantage of a 6-year-old girl, but nothing in that passage could possibly create arousal -- only disgust.  Her biggest complaint -- other than "pornography" -- was that teens who selected the alternate were deprived of educational services in the form of classroom discussions. She called this discrimination.
In contrast, the teacher talked at length about how hard educators work to incorporate parental requests, always thinking of ways to improve their efforts to meet the needs of students. She listed several specific steps she has taken to improve her handling of issues brought to her attention by the challenger. The challenger had said that there were many books that could be used, and Ms. Whitaker had asked her to send a list. To date Ms. Whitaker has received no such list from Ms. Lesesne.
Ms. Whitaker said she has tried repeatedly to find a book that would meet criteria set by the state (including Lexile score and focus on Latin American literature), but each book that she had found contained material that would have been found objectionable by some readers.  She mentioned the fact that the accrediting association will be visiting the school, and she is concerned about the possibility that a censorship issue could threaten accreditation. She read examples from some of the essays students have written praising the class and the important learning that had taken place. She talked about the positive messages that readers receive and the fact that the passage read by the challenger was only 1% of the book. The book needs to be studied as a whole, not just a few isolated and out-of-context passages. She gave statistics about how many times students have chosen the alternate book, pointing out that this semester -- despite all of the publicity about the book challenge -- only four students have requested the alternate book. Some 93% of the parents gave approval for their teens to read this book. She mentioned the fact that Watauga High School ranks third in NC in test scores, and the two schools that scored higher teach the book. How could our students compete if they are denied access to it?
Sadly, she mentioned the fact that teachers have experienced threats and are uneasy about their jobs. They need to know that the School Board supports them.
What they got from the school board was a split decision, with board member Ron Henries providing the swing vote. Mr. Henries expressed the difficulty he encountered in making his decision to support the use of the book, saying that he personally did not like the book, but he listened carefully to parents who approached him asking that he allow their teens to study the book under the guidance of Ms. Whitaker. Since only four students chose the alternate book this semester, he believed that the 93% should be given their preference, concluding with the idea that in the future, if most parents do not want their teens to study it, the use of the book will die like the dinosaurs.

Posted by J.W. Williamson at 2/28/2014 10:34:00 AM
Email ThisBlogThis!Share to TwitterShare to FacebookShare to Pinterest
Labels: censorship, Watauga County schools

Thanks for this, concerned citizen! Saw this 1st and then read Jesse Wood's article in High County Press. Check it out: http://www.hcpress.com/news/watauga-county-board-of-education-votes-3-2-to-keep-the-house-of-the-spirits-in-the-whs-curriculum-thursday.html

Odd that Henries felt that he needed to denounce the book as horrible. Looks like he was playing both sides, but it was his vote that counted.

Playing both sides is a dangerous game and it suggests that next time he could just as easily vote for book-banning.

I appreciate the fact that 3 members of the School Board voted to allow equal rights for all parents of WHS students to make choices for their own teens. If this had not passed, 7% of the parents this semester would block the choice for 93%.

It is alarming that the religious views of a minority have this ability to disrupt curriculum for the majority.

Chastity Lessene, who advocated for censorship and book banning, must also censor her children from reading violent and sexual sections of the Bible. A brother kills a brother in Genesis. Lovers meet in Song of Songs. The penalty for rape is discussed in Deuteronomy (the rapist must marry the victim.) Lot offered up his virgin daughters to men of Sodom who wanted to have sex with two male angels staying at Lot's house. The male angels were under Lot's protection; therefore the daughters had to be given up to protect them.

We need to vote out the two Board members who voted for censorship. They do not care about the education of our students.

Instead of reading the Allende book, the parents who want to ban it should study history. As they pledge allegiance and conflate patriotism, morality and all that is right with the world with their narrow and extreme views of Christianity, they seem (and no doubt are) unaware of the precedents of history in which totalitarian regimes which they are themselves quick to criticize (North Korea, Iran, U.S.S.R., China) have first and foremost tried to eliminate literature that did not comport with the world view which was being promoted.

If these parents want children to learn about sexual issues in healthy ways (so they won't be "excited" by depravity which is depicted in the book and exists in the world, maybe they should support sex education in our schools. It's badly needed. Instead, they sticks their heads in the sand and pretend that they can protect their children from the world by putting blinders on them. Hasn't worked for the Amish, who are less hypocritical than the Franklin Graham sect, and it won't work here.

We need to urge the School Board to pass a new policy that states that any material approved by the NC Dept. of Public Instruction can be challenged only at the state level. This is only fair because teachers should be free to select any material on the state-approved list without fear of being attacked.

Wanna know what's really sick, twisted, and pornographic? The fact that the state legislature wants to insert vaginal probes into women who seek abortions. For no good reason other than just to humiliate women and because state legislators have some really twisted sexual perversions of their own.


I find it mystifying that if the challenging mother found the language in the book so pornographic and objectionable that she would read it out loud to a large room full of people, including many students. Maybe she just titillated herself and that's what this whole thing was actually about.

I'm trying to imagine the complexity of lesson planning if the public is allowed to vote on which songs to be sung by the chorus, which book is to be read, which topics in science to be taught, which hairstyles to include in cosmetology. . .

That's easy, you just ask the Taliban how they do it.

And I'm beginning to think once again some people in Watauga really would be more home over there then here.

That or they really need to stop confusing religion and politics. Either way the fact we're going to see this used as the next great moral wedge issue by the righties around here really is sickening. As the priority should be what's best for students, not what's best for peoples personal agendas and appointing to the BOE only people who agree with their version of what morality is.

As the priority should be what's best for students, not what's best for peoples personal agendas and appointing to the BOE only people who agree with their version of what morality is.

You are doing exactly the same thing. you do not an people with ideas that you don't agree with on the BOE exactly as you accuse others of doing.

We all want what's best for students. The problem that must be solved is who should make decisions about what is best. The challenger based her challenge on the belief that she should be allowed to decide, and the beliefs of the majority of parents should be ignored.