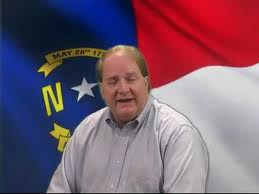 Jonathan Jordan (bless his heart) offered a compromise amendment to the state budget being debated in the NC House that would have preserved public financing for appellate judge races in the state. "Public financing" has been voluntary under NC law; you can mark the "tax check-off" on your state income tax returns, or not, and $3 goes into a fund to help our judges stay above big-money politics.

Jonathan Jordan (bless his coward's heart) withdrew his amendment after Art Pope, the Dark Lord of Let's-Buy-Us-Some-Patsy-Politicans and Gov. McCrory's Budget Director, came down on him for showing dangerous independence.

According to the News & Observer, "Pope has been a long-time foe of public financing, going back to his days as a state legislator. The various organizations that he and his family have helped start and finance, such as the John Locke Foundation, have been outspoken in their opposition to such programs."

Plus he owns Jonathan Jordan's sorry ass, and the rest of the anatomy attached: "Jordan has close ties to Pope. When he was first elected to the state House in 2010 he received $16,000 from Pope and his family, according to The Institute for Southern Studies. Three groups associated with Pope – Americans for Prosperity, Civitas Action, and Real Jobs NC – gave $91,500 to Jordan’s campaign. Jordan worked two years in the late 1990s as a research director at the John Locke Foundation, a group started and funded by Pope and his family."

Jonathan Jordan (bless his unaccountable coward's heart) "was not immediately available for comment."

Can no one free us of this puppet representative?

I wish Steve Goss would run for this seat. He knows Watauga and Ashe better than anyone, and was the most responsive state senator we've ever had. And he cannot be bought. Would love to have his independent spirit back in the legislature.

Agree with Anonymous #1. Goss and Jordan are completely opposite in principle, honesty, and concern for the people of the High Country. Jordan is just Pope's pimp. (Hey, folks, that may be a good label, fit for a bumper sticker.)