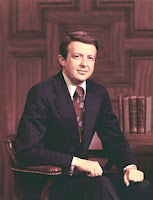 Gov. Jim Holshouser, who died yesterday at age 78, was born in Boone and represented Watauga County in the General Assembly for three terms before becoming state GOP Chair and then governor in the election of 1972. I had been in Boone two years at that point, voted for his Democratic opponent Skipper Bowles in that election, but Holshouser was a good governor and a good mountain Republican of the sort that North Carolina used to have plenty of.

Gary Pearce summed up some of Gov. Holshouser's accomplishments, which would get him barred from the NC GOP today: "Big pay raises for teachers ... Statewide kindergartens ... Coastal Management Act ... Rural health centers ... Expansion of the state park system ... More African-Americans and women in government ... Help for black business enterprises...."

This Republican bunch now in control in Raleigh, who are defecating on everything that represents moderation, fairness, and sympathy for the poor and weak, are certainly the Helms progeny, grown even more rancid than ole Jesse could even imagine.