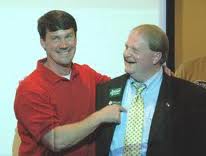 Another nail in the Republican-built coffin of "smaller government."

Republicans don't really believe in "small government." If someone can get rich off government tax breaks or in a situation like this water business, they're all for it. They'd love to control what we read, what we drink, how much sex we have, etc.

Why should they be compensated for infrastructure that allows them to steal water from out side their corporate limits?

There you go again, Anonymous.. perpetuating your "stealing" meme. Please point us to a law or regulation that says that towns or cities must obtain water from inside their corporate limits. There are many cities in NC that obtain water from outside their city limits. If the town buys land and lays pipe out to the river, you think it's ok for the county to grab that without compensation????