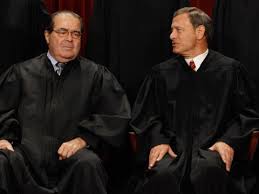 Even the conservatives on SCOTUS admit that the law has been singularly effective in broadening and protecting the voting rights of minorities, which, in Chief Justice Roberts' twisted reasoning, is the prime reason for now gutting it: everything's hunky-dory, so why have a Voting Rights Act at all?

Don't look now but the conservatives on SCOTUS just substituted their opinion for the opinion of the Congress, which is precisely what conservatives mean when they chant "judicial activism."

And now, given license by the conservatives on SCOTUS to discriminate again, the states of Texas, Alabama, and now of course North Carolina are poised to enact and enforce harsh and discriminatory new voter suppression laws.

Way to keep the brown people in their place, SCOTUS! But this should give new energy to Moral Mondays in Raleigh.

I watched Chris Christie decry the DOMA case as judicial activism, but not a word of criticism about the unparalleled activism in gutting of the VRA. Also haven't heard a single commentary about the anti-zoning and anti-municipality decision the right-wing side of the court issued, overturning the Florida Supremes.

I propose a constitutional amendment that no more Catholics can be appointed to the Court or elected to Congress. From our own V. Foxx to every one of the evil majority of SCOTUS - all Catholics. Enough already.