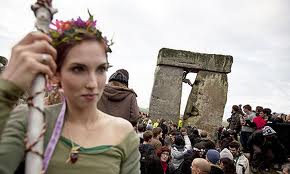 Tomorrow night at precisely 1:04 a.m., the sun will appear to stand still for an instant as it reaches its highest excursion point above the equator, otherwise known as the summer solstice. It's actually the earth, of course,  that has tilted its northern hemisphere as far as it will go toward the sun and will begin at 1:04 to tilt the other way. ("Solstice" translates as "sun standing still.")

If you're a Druid, or other enlightened pagan, it's the holiest moment of the year. Many, many early cultures began calendar keeping after observing both the summer and the winter solstices. The winter solstice got highjacked centuries ago for Christmas, which is why pagans still hold tight to the summer solstice. At Stonehenge, they'll be having a par-tay.

Shakespeare wrote Midsummer Night's Dream to celebrate the appearance of fairies in the woodland landscape on the solstice, when some men can also become asses and everybody falls in and out of love, willy-nilly.

Herbs have stronger healing powers on the solstice, and magic spells have greater range and effectiveness.

If you love the earth and gardens and the eternal turn of the seasons, you'll know where to be tomorrow night at 1:04 a.m.