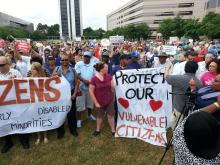 Biggest crowd yet at this afternoon's Mega Moral Monday protest on Halifax Mall in Raleigh. Over 150 committed civil disobedience and were arrested inside the General Assembly.

RALEIGH — Jennifer Ferrell stopped for a moment, and her husband took her picture. She waved goodbye to her 3-year-old twins. Then she marched into the Legislative Building to get arrested.

“I’m excited. I’m not nervous,” the 34-year-old Raleigh resident said as she walked in a line of demonstrators. “I’m passionate. I’m not crazy.” ...

Rep. Garland Pierce, a Democrat from Wagram and chairman of the legislative black caucus, spoke to the crowd inside the statehouse and encouraged them to let their voices be heard.

Carrboro Mayor Mark Chilton and other local elected officials were also among those arrested.

“This is unconstitutional, what you are doing here, officers,” Chilton said as police put zip-tie handcuffs around his wrists. He refused to clear the rotunda on the second floor of the legislative building when police demanded, asserting he had a constitutional right to assemble....

Posted by J.W. Williamson at 6/03/2013 09:38:00 PM
Email ThisBlogThis!Share to TwitterShare to FacebookShare to Pinterest
Labels: North Carolina General Assembly, revolution in the U.S.