What's Ahead for North Carolina 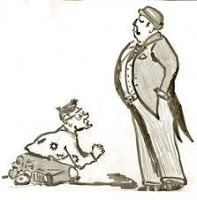 Republicans in the General Assembly evidently have a grand plan for "reforming" taxes in this state: eliminate -- eee-limb-a-nate -- all personal and corporate income taxes and shift the tax burden onto the poor and middle class through higher sales taxes, while imposing new taxes on services, like getting your hair cut.

Cool plan. Art Pope's minions thought it up and posted it a month ago on the Civitas website. Now Art Pope is Gov. McCrory's budget director, so he'll get 'er done.

Reuters is reporting on it. Some 65% of NC's annual budget comes from income and corporate taxes. Shifting that burden to the working class will mean that the state's sale tax will have to rise a couple of percentage points, putting the burden for government exactly where the rich have always known it needed to be: on the backs of the poor.

Sen. Bob Rucho is the chief stooge in the General Assembly tasked with getting this done, and guess who he's been getting help from:  Arthur Laffer, a former adviser to Republican President Ronald Reagan and one of the fathers of "trickle-down" economics.

Yep. The 1% are in control of North Carolina now, and they intend to make themselves very comfortable indeed.

Do you really believe that the rich do not by more expensive items than do the poor and middle class and many more of them?

Every study ever done by reputable economists (this of course excludes the ones over at Fox) shows that consumption and sales taxes are very regressive, i.e., they fall harder on poorer people. The only way to get people to pay their fair share is taxing their income: cap gains, income, inheritance--the ways the rich get their money. You want revenue, you tax who has it. We used to call sales, etc., taxes "nuisance" taxes, implying that they don't affect each individual very much. But as they have become more popular and rates have risen (because the rich and corporations keep wanting their own income tax rates lowered), they begin to have more and more effect on people whose income and saving levels are low; they still have to drive, eat, shop, etc. The rich do these things too, of course, but not dozens of times more often than the rest of us.

That's exactly correct. It is not mathematically possible for the 1% to match the purchasing power of 99%. In addition, the 1% invest their excessive wealth, the rest of us spend on needs.

I'm proud you recognize the difference.

JW drinks the moonshine and he drinks the thin beaded kind. His thinking is gone. He copies and he steals ideas from the left wing. Nothing is making any sense. I recommend JW volunteer for the Moonshine Show.

I know you have to post something silly and stupid every time J.W. makes a new post but COME! ON!

Ok ok, fine I promised myself I was going to stop bothering with you but this one, I can't resist.

Math time! So do try to pay attention.

Now I can spend easily over $200 dollars a month on grocries alone just to feed myself. Before we start talking about anything else. Replacement clothing, the odd bit of fast food or snacks at work, a couple paperbacks or an occasional video game I buy with spare cash.

If you want to make this a family with two kids you could probably easily increase the grocery bill if not double it, or add in school supplies, more clothing, etc.

And how much of that is a rich person going to buy?

Even if they did (kids of their own and all, so on) By your "Rich people buy more stuff" illogical logic? Just to break even with total percentage of income used the rich person would have to buy $20,000 worth of items (resulting in a total sales tax of 1000, or 1% of income) EVERY MONTH.

#1 By spending that 20K (which could probably be easily done on certain luxery items) That rich person has at the drop of a hat disposable throw away can be taxed income equal to what my (oh dear I have to use the word) "Lame hypothetical" person makes in a month of actual work. Do you not see the income disparity here? Ah but I forgot, the rich person will certainly spend more then a mere 20K he'll buy all kinds of expensive things. But again, and let's see if this point sticks instead of zooming through that empty space between your ears.

He'd have to keep buying to make up the sales tax difference once corporate goes away. How many fancy cars or diamond rings do you buy a month? Much less in a year? That and one other little flaw in your childish simplicity.

#2 For it to be part of the sales tax it would have to be an item being sold in the good state of North Carolina.

Suits he got on that trip to NY? Nope

Food for that 100 person party at his second home down in Florida? Nope again!

Anything ordered through Amazon, Barnes and Noble, or any other online store? Still going with nope here.


Seriously anon could you try a bit harder please? I mean you've said some pretty silly things, but this one was just too easy.

Here I'll even give you two more to work with, I'm feeling generous today.

How much sales tax does Art Pope pay when he buys a Republican politician?

The same tax as Mary Easley, Jim Black, Meg as well as others. Democrats are crooks from end to end.