The Parallel Worlds of Arthur Laffer 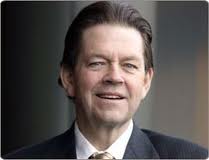 Who is Arthur Laffer? Short answer: the man most responsible for the Reagan administration's "trickle-down" tax policy that resulted in the first huge bounce in this nation's deficit.

Also the man behind the NC General Assembly's current plan to eliminate (or perhaps only greatly reduce?) the income tax on the rich.

Arthur Laffer has been the go-to guy for conservatives in various state legislatures looking to shift the tax burden away from the rich and onto the backs of the working class. In 2011, a right-wing think-tank in Oklahoma hired Laffer's consulting firm to write a report that "suggested that Oklahoma would benefit by lowering taxes on businesses and the wealthy and scrapping credits for lower- and middle-income residents."

This plan was introduced as a bill in the Oklahoma state legislature, and its authors hosted Laffer in the state to promote the idea. But economists started actually analyzing Laffer's numbers, and the bill didn't pass. But that didn't slow down Laffer one bit.

In 2012, another conservative shop invited Laffer to do the same job for the state of Kansas and also invited Laffer to come to the state and talk up his plan. Unfortunately, unlike Oklahoma, Kansas passed the plan and are just waking up to its full effects. The purpose behind the Laffer Plan is to squeeze government down to a size that can be drowned in a bathtub, and empirical evidence shows that states that follow this path suffer:

In Kansas, ... essential services are already in serious danger. After passing the Laffer bill, the state is now projecting $800 million annual budget deficits and has extended an emergency sales tax that should have expired years ago. The Kansas budget director has instructed all state agencies – including those that handle education, law enforcement and highway safety – to plan for a 10 percent across-the-board cut. If the tax cuts aren’t repealed, Kansas’s already cash-strapped schools and universities are expected to lose over a billion dollars in funding in the next five years.

And for what? Businesses aren’t flocking to Kansas in anticipation of a lower marginal tax rate. Since May, the state has added only about 2,000 jobs. In the same span of time, Oklahoma – which rejected the same proposal – added nearly 12 times as many.

We're indebted to Nick Carnes, who has lived in both Oklahoma and Kansas, for the quotes above and for pointing out the sheer folly of the steerer of The Clown Car in Raleigh, who appear hell-bent to bring the Laffer Laugh-Riot to North Carolina. And, yes, the NC legislators are relying on a plan written by Laffer's consulting firm.

The Republicans' entire rationale, they say, is to improve the business climate in the state and thus bolster jobs. But Carnes points out that a state that starves its infrastructure, neglects its school system, whittles away at its university system is a state that will turn off businesses looking to relocate. Who wants to relocate to a 1950s version of Mississippi? (Or a 2013 version of Kansas, for that matter?)

He doesn't make me feel like being a laugher!

He is a disgusting neo-con, establishment goon, propagandist for the Wall Street banksters.