The Jokes Just Write Themselves 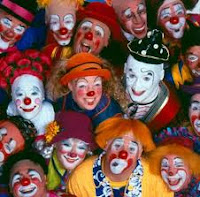 The Republican National Committee convened for three days this week in Charlotte and reelected Reince Priebus as its national chair. They also argued with themselves and rationalized their recent national defeat. Supposedly, there was some considerable soul-searching, but as Politico pointed out, they collectively decided that “...the party’s main problem ... is who delivers its message and how, not the message itself. Overwhelmingly they insisted that substantive policy changes aren’t the answer to last year’s losses.”

Whatever, dudes. It’s your party. And you’re welcome to it.

But so far as actual soul-searching goes, you can be the judge...


1. “We’ve got to stop being the stupid party,” said Gov. Bobby Jindal of Louisiana

2. “We have to go places we haven’t been,” said Reince Priebus

3. “It’s not the platform of the party that’s the issue,” Priebus said

5. "Listen, we've got to grow our party without compromising our principles. That's the bottom line," Priebus said

6. "Tone matters. It's not only what you say; it's how you say it," said Saul Anuzis, a former RNC national committeeman from Michigan.

7. "I just think we have to be cognizant of the fact that you can approach [social issues] in such a way that is open and inclusive and tolerant and understanding of other people's positions," Anuzis said

9. “When it comes to young people, when it comes to new African-American leaders, Hispanic leaders, we really have done an incredible job over the last few years. We’ve just done a lousy job bragging about it, ”said Priebus

11. Party leaders need to work on “not being sour-pusses on television or the radio, ” New Hampshire chairman Wayne MacDonald said

12. “Nobody is saying the Republican Party has to change our beliefs in any of our platform planks. This party wants to serve everybody that believes in our principles,” MacDonald said

14. “This [Obama] administration is a socialist administration. There’s no question about it,” Curly Haugland, national committeeman from North Dakota, said

15. "I will talk to a head of lettuce if I can get them to vote Republican," said Party co-chair Sharon Day

16. “It's time for a new Republican Party that talks like adults," Jindal said

19. "Any Republican that's thinking about talking about running for president in 2016 needs to get his head examined," Jindal said

And then – and then – without objection, the full Republican National Committee approved a resolution by voice vote Friday calling on Congress to defund Planned Parenthood and redistribute the money intended for cancer screening and preventive services to organizations that do not perform abortions.