Interesting and lengthy analysis of what to expect from the NC General Assembly in the legislative session about to convene, including projected intra-party spats between Republican big-heads. Best quote is from House Speaker Pro Tem Paul Stam, who said that the GA must cut back on state regulations. "I hope, by the end of the session, we'll have the craziest rules whacked down," said Stam.

By "craziest rules," Stam evidently did not mean the various and humiliating intrusions into a woman's right to choose an abortion, including vaginal probing, all of which he enthusiastically supported.

Julia Howard, an NC House member from Mocksville, is leading the GOP charge to reduce unemployment benefits for the jobless. Even though the federal government is picking up the tab, Julia and her friends want to reduce the top benefit by 35% anyway and also reduce the amount of time people can receive benefits. Why? They feel current benefits are "too generous" and make people "dependent" on the government.

To which Progress NC hatches a "what if":

...let's pretend Julia's karma has caught up with her. She's lost her re-election bid and returned to Mocksville only to find that, because she and her peers were too busy passing judgement on the unemployed to address economic development or job creation, her services as a real estate broker are no longer needed. Your mission: tell us, please, what Julia should do to earn a living now. That $350 a week in unemployment benefits won't last forever. 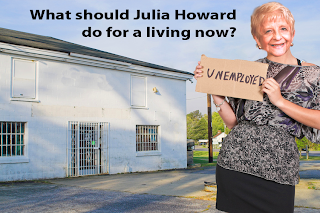 Speaking of Virginia Foxx clones, we came across this album sleeve on Facebook, where people were asking, "Who dat woman?" 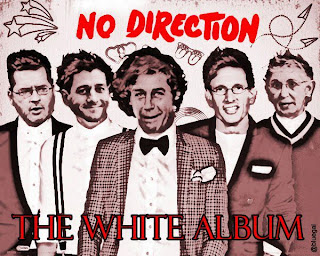 I ask these questions in all sincerity:

How should the General Assembly deal with the 2 billion dollars in unemployment loans North Carolina owes to the Federal Government (third largest debt in the country)?

More importantly, how did we get into this situation? What mistakes did our state make, and how do we keep from such blunders in the future?

From what I can gather, Representative Howard is left with few options, each having drawbacks.

Again, I genuinely would like to hear your thoughts on the questions above.

In this instance, I’m not looking for more questions, but rather answers or thoughts on the subject.

JW, I would very much like to hear from you. How did we get here? What is the solution to the problem(s) facing Rep. Howard?

The depletion of NC's unemployment insurance trust fund began in the 1990s with tax cuts for employers (enacted by, yes, pro-business Democrats). That was followed by two -- not one -- by two historic downturns in the economy. For every available job right now there are at least three, and probably four, job-seekers. Any "solution" that blames the jobless as lazy or government-dependent and that simply cripples the unemployment insurance trust fund even further is no solution. The anti-tax trend of the contemporary GOP digs deeper holes.

Thanks for the reply.

In general, I agree that blaming the jobless for their precarious situations is wrongheaded. Many have made, and continue to make, an effort to find a employment. With that said, something must be done about the $2 Billion we owe the Federal Government.

With all due respect, simply describing a proposed way forward as “no solution,” is certainly not a solution either. What is the Democrat position here – I’m genuinely interested.

Obviously, the root cause of the problem is joblessness. North Carolina’s unemployment rate has remained above the national average for years. Where did we go so wrong? Everyone agrees that business creates jobs, why have we had such trouble attracting employers, the job creators in the past?

I just read an article on the number of prisoners in NC receiving unemployment benefits.