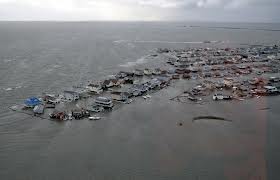 It's one thing to spend Federal dollars to help people wiped out by Hurricane Sandy in New York, New Jersey, and adjacent states. It's another thing to blindly set a government policy -- "let's rebuild everything the way it was" -- which is apparently what the $60 billion aid package does which passed the U.S. House yesterday.

I'm mightily influenced by reading Rob Young's piece about the reality of sea-level rise and the reality-free impulse behind the aid bill (big hattip to Rob Schofield at NC Policy Watch for bringing this piece to my attention).

Rob Young is professor of coastal geology at Western Carolina University and director of the Program for the Study of Developed Shorelines. He earns major props for being co-author, with the amazing Orrin Pilkey, of The Rising Sea.

In a piece titled "Hurricane Sandy Relief Bill Fails to Face Coastal Realities," Young points out the flaws in this particular Federal emergency spending that actually sets coastal policy for the immediate future and the long-term. This policy-by-default says in effect, "We deny sea-level rise":


The bill goes far beyond the immediate need for emergency assistance by funding a massive coastal engineering effort that is not based on science or wise planning. As currently proposed, the bill would give the U. S. Army Corps of Engineers roughly $4.5 billion to spend on coastal construction projects related to “flood control and risk reduction.” Most troubling, the bill requires the Corps to attempt to rebuild the New Jersey and New York beaches to their “design profile.” In other words, the Corps will work to put the beaches back exactly as they were before the storm, ignoring the reality of rising sea levels and intensifying storms as the world warms.

In other words, O My Brethren, I have to agree with the "no" votes of the nine Republican NC U.S. House members on this particular aid package ... though for very different reasons than any of those Republicans have voiced.

I suspect when the next Great Storm wipes out part of the North Carolina coastline, these same nine will be clamoring for Federal restoration -- well, probably not Virginia Foxx, who isn't much into compassion for anyone -- and no one in a position of power will be paying any attention to what Mr. Young and other scientists are warning about the perils of ignoring sea-level rise.