How the Outside Money Rolled in NC 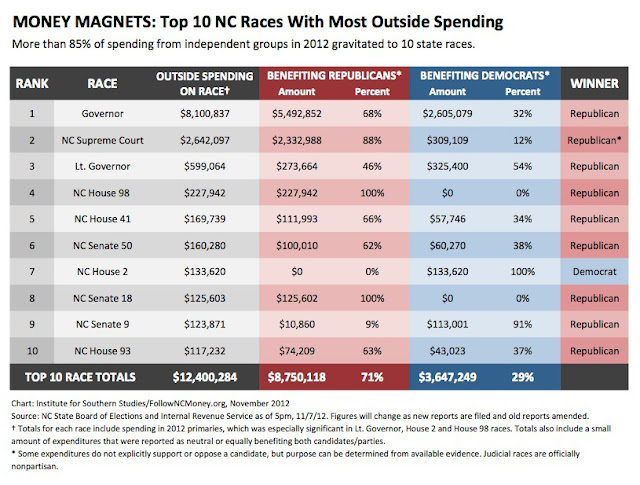 From the bottom of this chart, going up:
The NC House 93 race was the Tarleton/Jordan contest.

The NC Senate 9 race was the Deb Butler/Thom Goolsby race down in Wilmington.

The NC Senate 18 race was the Doug Berger/Chad Barefoot race.

The NC House 2 race was for Jim Crawford's old seat, which was open once Crawford lost his primary.

The NC Senate 50 race was the John Snow/Jim Davis race south of Asheville; Snow was trying to take his old seat back from Davis.

The NC House 41 race was the Jim Messina/Tom Murry race down in Raleigh.

The NC House 98 race was the ... well, it really wasn't a race at all, because Republican Speaker Thom Tillis was unopposed. He's exactly the kind of character the Deep Pockets like to shovel money at. Because they're grateful for the special favors.

Chad Barefoot is an ASU and also a SE Baptist Seminary grad. His mother in law is Tami Fitzgerald, chair of the NC Values Coalition that successfully passed Amendment 1. Chad has a lot in common with our own dear Dan Soucek. He is being groomed for bigger things by the Pope/Stamm/Tillis machine, mainly b/c he is mediocre and easily flattered.

Once again, in hopes of getting by the censor, is outside money raised from outside the district or the state?