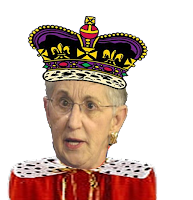 According to the New York Times, Republican Speaker of the House John Boehner held a conference call with his Republican troops after the election, told them that they had to recognize reality that their party just took a beating nationwide, and then laid down the law. We have to avoid "the nasty showdowns" with President Obama that marked so much of the last two years, Boehner told his fellow party members in Congress.

Buried way down in that article is this paragraph:


"...The handful of Republican backbenchers who spoke up agreed, and those included often-rebellious conservatives like Representatives Phil Gingrey of Georgia and Virginia Foxx of North Carolina...."


Congresswoman Foxx knows how to go along with the Big Boys to get along. At heart, she's always been a company man.

Definition of "backbencher": 1. Not a party leader; 2. Someone who exaggerates their actual power, influence, or importance, usually for nefarious purposes.

Posted by J.W. Williamson at 11/11/2012 11:57:00 AM
Email ThisBlogThis!Share to TwitterShare to FacebookShare to Pinterest
Labels: John Boehner, Virginia Foxx