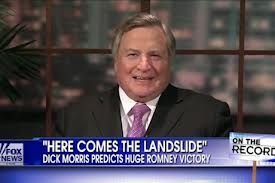 GOP strategist Todd Harris told Politico reporter Jonathan Martin, "If all you did was watch and read the conservative media, you were probably pretty shocked at what happened Tuesday."

No kidding. I have witnessed the baleful effects of the Fox News Bubble in my own family. Some of the elderly, who seem to spend all day absorbing the wild-ass conspiracy memes popular on Fox News, have not been able to adjust to actual reality so far since last Tuesday. In fact, as Ben Domenech put it (also quoted by Jonathan Martin), “The right is suffering from an era of on-demand reality.”

On-demand reality. Turn on Fox News and you get all your prejudices flattered, your suspicions confirmed, your narrow world-view triumphalized.

“Dick Morris is a joke to every smart conservative in Washington and most every smart conservative under the age of 40 in America,” said Ross Douthat. “The problem is that most of the people watching Dick Morris don’t know that.” For a nearby example, you need look no further than the slavish attention The Watauga Conservative gave Mr. Morris in the weeks leading up to the election. They linked to his blather as though he knew what he was talking about.

Not dealing with reality has built-in dangers -- ignorance can kill, after all, as this sad tale demonstrates (this story emerged originally on Facebook and has since been picked up by Crooks & Liars):

...FOX News killed my precious mother, Hallie. She watched FOX religiously. And when she fell ten days before she died, she refused to go to the doctor because, "I don't want Obamacare to get all of my information!" she declared, recalling the warnings from FOX News "anchors." She was emphatic. She was not going to consort with the muslim enemy. As she made out her will she told her lawyer, "I don't want any of my money going to the Muslim Brotherhood!" And her last protestation dealt with "Obama's death panels." Mother died just days later. I hold FOX News responsible for my mother's death.

Richard Ramsey called it "The Fox Geezer Syndrome." Ramsey, a self-described conservative, watched his own mother go round the bend on a daily diet of Fox News (in particular, Glenn Beck).

Another example: the woman who wrote in to an internet advice board that the election was ruining her marriage because her husband was glued to Fox News every night. It wasn't just the watching that was a problem. He became mean, aggressive, demeaning to his wife of five years who did not share his views. Intolerance in a marriage ain't good.

We already knew that watching Fox News can actually make you stupider (and hence the jaw-dropping incredulity in some quarters when the president won last Tuesday). Now the accumulating evidence is that Fox News can also drive you insane.

Yeah, CRAZY! Have you seen this? http://www.examiner.com/article/15-states-including-texas-have-filed-a-petition-to-secede-from-the-united-states-1

If the number rises to 26, can they just throw the other 24 out? It might save effort?

What about the rest of the 57 states?

David Carr is a great reporter on the media, and his piece on what went on at Fox News last Tuesday night is good reading. (http://www.nytimes.com/2012/11/12/business/media/fox-newss-election-coverage-followed-journalistic-instincts.html) He says he's "reassured" that the unbiased news-gathering of the network won out. I ain't so sure 'bout that. He also says that up until Election Night, Fox News was deliberately "keeping its viewers wrapped in a gauzy bubble of conservative notions about a country that had lost regard for its president." Turns out, the country kinda loves this president!


Turns out, the country kinda loves this president!

About half of the citizens detest him.