Thom Tillis Flirts with the Crazy 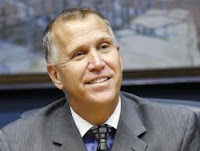 Travis Fain at the Greensboro News & Record tracked Republican Speaker of the NC House Thom Tillis and his pre-Thanksgiving pander to the Far Right, which thinks that any state (especially the ones in the South) can simply say they don't like any Federal law and by means of such a declaration choose not to follow that law.

It's called "nullification," and it's what the cotton-brains in the South advocated in 1860 until mere advocacy demanded actual cannon fire.

Mr. Tillis said he kinda, sorta likes some of that idea.

In other words, O my Brethren, the state of North Carolina has much further to go before it bottoms out in the new Republican Trough of Stupidity, because there are no Republican leaders with the sense and courage to stand up for reality (not to mention the Constitution).

Posted by J.W. Williamson at 11/27/2012 11:55:00 AM
Email ThisBlogThis!Share to TwitterShare to FacebookShare to Pinterest
Labels: Republican brand, Thom Tillis

178 pntliveThe Constitution requires state to use nullification. It's called the tenth amendment.

Hoping the few remaining NC journalists are prepared to work overtime to keep up with the bullshit that's about to overtake our good state.

Yes indeed. The liberals are going to cry and whine to an amazing extent over the needed reforms that are made.

JW, you just love federal laws controlling all aspects of our lives, don't you? The more the better, huh? According to you, the states are mere appendages of a bloated, overgrown federal bureaucracy.

Why do we need a Constitution or a Bill of Rights? 'Not to mention that the feds ignore these documents. The power-mad goons only refer to them when these articles and amendments serve their purposes.

To you, JW, all we need is a overbearing, tyrannical, oppressive, murderous, thieving District of Criminals dictatorship.