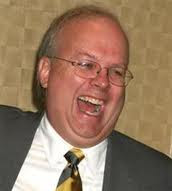 Business Insider is saying that Karl Rove is the first casualty of a "beltway Establishment" purge. Rove raised a boatload of money and apparently spent it unwisely, paying himself handsomely in the process. But according to a new report, 'American Crossroads got a mere 1% return on its $104 million investment in 2012 races."

But -- alas! -- it isn't any "reality-based" faction of the GOP wanting to make Rove walk the plank. It's the far-right fringe, the very minority that has pushed the Republican Party into all kinds of dandy positions:


...Rove's treason began long before election day, when the Fox News contributor led the party's tar-and-feathering of Missouri Senate candidate Todd Akin, who came under fire for his now infamous "legitimate rape" comments. The party's perceived betrayal of Akin confirmed what many grassroots conservative activists had long suspected: That the Republican Establishment was willing to throw the base under the bus to serve the interests of deep-pocketed donors.


Rove's biggest sin? Stepping on Newt Gingrich and Rick Perry every chance he got while pushing Romney on the gullible church-goers.

Some days it's good to be a spectator.