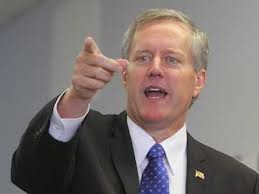 Mark Meadows, the newly elected Republican congressman from the 11th Congressional District of North Carolina (Heath Shuler's old district, minus most of liberal Asheville), is starting his elected life sounding, well, reasonable, not to mention "reality-based."

He tells the Asheville Citizen-Times that he knows now that Obamacare is not going to be repealed and that maybe he can help make it better. Nothing wrong with that.

But here's the best part: "He said he would also support broadening the tax base to capture more revenue .... And he would accept some part of the revenue from leases on public lands, for operations like logging and mining, going to government research on alternative energy if it means more jobs."

"Obama’s reelection, he said, made him re-think his strategy." Well yeah.

Posted by J.W. Williamson at 11/11/2012 11:35:00 AM
Email ThisBlogThis!Share to TwitterShare to FacebookShare to Pinterest
Labels: Mark Meadows