Wha's Up With This? 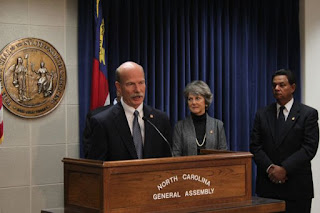 NC House Rep. Bill Faison made some show of announcing today that he had loaned his campaign $500,000, considerably more than he would need for a successful reelection campaign for his House seat.

Refuses to say what he plans to do with that pile, though he's already promised he wouldn't run a primary against Bev Perdue. He's also been less than polite in calling on Perdue to step aside, so we've gotten some mixed messages.

Exile on Jones St. ventures that a gubernatorial primary is "looking more likely." Which perhaps only proves that it's not just a quarter of Republican voters in Iowa who have a death wish.