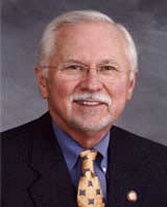 Former NC House member Cullie Tarleton announced this morning that he would be taking on incumbent Republican Jonathan Jordan in a rematch this November. Even Jordan's supporters are hard pressed to think of anything he's done for his district. He's mainly marched off the right side of the earth, in blind obedience to former employer Art Pope and the self-destructive Raleigh/Charlotte leadership of his party.

He may have "announced" today, but he has been running since he lost the last election!
We don't want you back Cullie. Enjoy your retirement!

The last time Tarleton ran against a Republican incumbent, he out spent the Republican three to one with money he got from outside the district. He had better get his owners to give him enough to go five to one this time. He will still lose.

Well now! There's a stop-the-presses moment for you. The Republican trolls won't vote for Cullie. They'd rather vote for the visibly lazy Jordan, who can't seem to roll over in bed without permission and considerable help.

I thought liberals were tolerate of everyone and would never put anyone down for weight, color or religion. I am shooked at the low life attack on Jordon because of his weight. Another reason, the Republicans will control the House, Senate and the Governor's office in 2012. Tarleton is a fake just like the one who published this ugly remark. Shame on you for your lack of acceptance of less than perfect people.

Go, Cullie, go! You are so much better than Jordan (smart but soulless). The tonguelsss one or two who posted above have no idea how much more you've done and will do for the people of NW NC than that slime J.J.

You're the one who brought up Jordan's weight, Anon 6:05. No other comment here said anything like that. I am sorry that you are "shooked."

Glad to see this!!

Ironic that some are complaining about outside money when Art Pope's group pumped so much money into this last election to send us all misleading mailers about Tarleton.