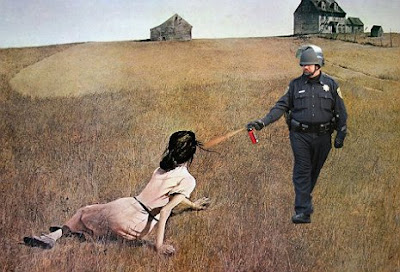 Posted by J.W. Williamson at 11/21/2011 09:33:00 AM
Email ThisBlogThis!Share to TwitterShare to FacebookShare to Pinterest
Labels: revolution in the U.S.

Oh, my! Even Christina isn't immune from these attacks!

Jerry, that cop at UC Davis was doing a government service—the feds have now declared that pepper spray is a vegetable. He was just giving them a daily dose—I mean serving them the USDA recommended daily amount.

Hahahaha, Shyster! I know you were making a wild joke, but last night on Fox News, Megyn Kelly said the exact same thing, only NOT as a joke and for realsies!

In other news, watching Fox makes you dumber by the day!

"People were asked questions about news habits and current events in a statewide poll of 600 New Jersey residents recently. Results showed that viewers of Sunday morning news shows were the most informed about current events, while Fox News viewers were the least informed. In fact, FDU poll results showed they were even less informed than those who say they don’t watch any news at all."