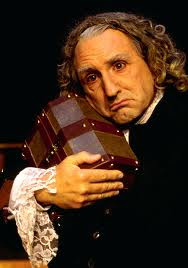 "Here’s why the supercommittee [failed], in one sentence: Democrats wanted the rich to pay more in taxes towards deficit reduction, and Republicans wanted the rich to pay less in taxes towards deficit reduction."
--Greg Sargent
Hattip: The Impolitic
Posted by J.W. Williamson at 11/22/2011 02:02:00 PM
Email ThisBlogThis!Share to TwitterShare to FacebookShare to Pinterest
Labels: Republican "brand"

Democrats wanted to continue to push the country toward socialism and Republicans didn't or at least wanted to go slower.

Define what you think socialism is.

People like you seen to want to paint anything they disagree with as socialism.

More often they try to win a political debate they have no moral ground to stand on by throwing out the word socialism.

Was the Blue Ridge Parkway that gave jobs to mountains families and boosted the local economy for the last 75 years socialism?

Where do you get your current events information?

Socialism has become a bogeyman for the right. These days when I hear someone raising the specter of socialism it's a sign to me not to take that person's arguments seriously.

The lack of willingness to compromise in Washington is troubling. Both parties carry some of the blame but currently the Republicans are the more intransigent party. Democrats on the committee made it clear that they were willing to tackle entitlement reform as long as Republicans were willing to put some taxes on the table, but Republicans simply weren't willing. If we want to get serious about debt reduction some give is needed both in spending and in revenue, so at the moment it's the Republicans who are holding things up.

Let's see, a long time ago, it was the "America First Party" the repubs latched onto (at least until Pearl Harbor) then it evaporated; then came the all-American effort to win WWII (which was lead by Democrats); then came the infamous Red Scare and Joe McCarthy of the 50s that morphed to communism (the repubs polished their speeches for decades); with the fall of communism, repubs were in a wilderness until they revived the terms liberal and socialism - the downfall of their lives as Stepford people of the 50s. Along with the government is the boogey man (Thanks, Ronnie Raygun). I tire of their stupidity and their promotion of regressive ignorance.