And the Young Shall Lead Them 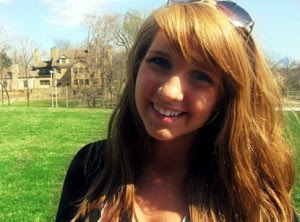 Meet Emma Sullivan, student at Shawnee Mission East High School in Prairie View, Kansas, who attended a speech given by Sam Brownback, former Church Lady of the U.S. Senate and currently governor of Kansas.
During the Guv's speech, Emma
tweeted, “Just made mean comments at gov brownback and told him he sucked, in person #heblowsalot.”

Proving the hashtag #heblowsalot wholly accurate, the Guv's staff of puritanical lip-pursers somehow spotted Emma's tweet (#nothingelsetodo), and just like the tattletales you hated in the fifth grade, they ratted out Emma to her high school principal, Dr. Karl Krawitz, a notorious pissant who promptly demanded that Emma apologize to the Guv, in writing, thus violating Emma's Constitutional right to free speech and exhibiting the worst instincts common among warehousemen to the young, all at once.

The story went viral almost immediately.
Now Emma Sullivan, who had but a handful of Twitter followers when she tweeted about the Guv blowing a lot, now has over twice as many Twitter followers as Governor Brownback.
BWAAA-ha-ha-ha.
Plus last night Emma tweeted this:

Posted by J.W. Williamson at 11/28/2011 11:13:00 AM
Email ThisBlogThis!Share to TwitterShare to FacebookShare to Pinterest
Labels: censorship, revolution in the U.S., Sam Brownback

Brownback has apologized to Emma! http://news.yahoo.com/blogs/lookout/kansas-teen-won-t-apologize-gov-brownback-over-145218154.html

Emma's free speech should not have been violated. Instead the principal should have taken her to the woodshed and switched her for disrespect for her elders.

I've always been of the opinion that as elders we have to EARN respect; we don't just "deserve" it by virtue of taking up space on the planet for a long time. Interestingly, I've never had to ask for respect from my children or anyone else's.