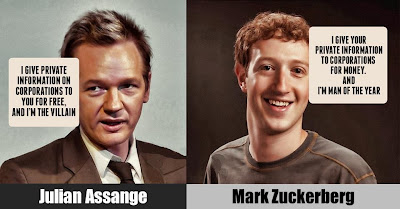 Posted by J.W. Williamson at 11/08/2011 10:06:00 AM
Email ThisBlogThis!Share to TwitterShare to FacebookShare to Pinterest

"If you're not paying for it, you are the product."

Capitalism can do no wrong.

Capitalism can do plenty of wrong, but that doesn't mean we should replace it with a system which does far more wrong every time it's implemented.

MikeD, you may be more correct than RV. Capitalism can do wrong, but the free market always works if you let it.

Are you guys really so determinedly blind? It was unregulated capitalism that gave us the constant cycles of boom and bust leading up to the great depression. And as soon as we removed the regulations enacted after the great depression, bingo - another bust that nearly destroyed the global economy!
Mike the choice is not either capitalism or communism. Our system is evolving and we should be smart enough to keep parts of it that work while fixing parts that don't work.

Brushfire, with all due respect, "smart" is not a characteristic of the True Believers in the Almighty Market, and while Lenin and the Bolsheviks were smart enough to figure out how to seize power, they had to make up Soviet Communism as they went along--and never did get it right. It is probably a myth that there even IS such a thing as The Economy and that it is subject to rational analysis. It is even more a matter of faith that a Free Market somehow is infallible, it's like the Bible (or the Pope) in the minds of many Christians.