When Gerrymandering Broke the Computer 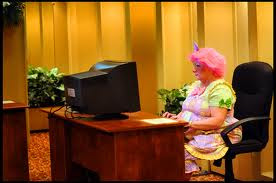 NC's new Republican-gerrymandered voting districts received Department of Justice "pre-clearance" yesterday, meaning they meet the requirements of the Voting Rights Act and don't dilute minority representation. The pre-clearance also means that the new maps can be used in the 2012 elections "absent a legal challenge." There will be a legal challenge, so this is far from settled.
One significant basis for a legal challenge will focus on the Republican hyper-gerrymandering that split many precincts, sometimes between more than two voting districts.
The splitting of precincts apparently led to a computer glitch in the Republican redistricting maps that came to light only hours before the DOJ pre-clearance was announced. In their zeal to insure their dominance of the state's General Assembly (which involved, among other maneuvers, a direct attack on several strong Democratic women incumbents), they drew new maps which flummoxed their computer software. Omitted from the maps were some 200 sections of the state involving thousands of voters who were simply left out.
The computer error affected 52 of the 170 NC House districts, 22 of the 50 NC Senate districts and two of the 13 US congressional districts. The error also created, according to Gary D. Robertson, 20 legislative districts "in which each district isn't entirely physically connected, which would run counter to the state constitution's requirement that they 'at all times consist of contiguous territory.' "
Oops.
Naturally, the Republican leaders in the Clown College are passing all of this off as something akin to showing up at work with mismatched socks, easily fixed. In fact, they now have something to work on when they reconvene next week (the press had been wondering why they scheduled a day of work at the Capitol for early November).
We predict drama on Jones Street.
Posted by J.W. Williamson at 11/02/2011 09:28:00 AM
Email ThisBlogThis!Share to TwitterShare to FacebookShare to Pinterest
Labels: redistricting

Oh come on, JW, aren't you being hypocritical, considering the history of the NC legislature on the subject of redistricting?

But the real issue is that the crux of J.W.'s story is a non-issue, probably a glitch with some mapping software, akin to you cropping an image of your best friend and accidentally cropping off a tiny piece of his arm with the select tool. It is probably very easily fixed, and it's unlikely that it's anywhere as sinister as J.W. makes it sound.

That's like claiming a major attack has occurred on the state Constitution because someone's WinWord auto-correct feature inadvertantly changed "marsh" to "march". Imagine the confusion that could create! It's probably easily rectified.

I'm looking forward to seeing the new map! I'm really curious to see if they fixed the 12th, so it doesn't look like Ralph Steadman's (Hunter S. Thompson's illustrator's) rendering of the Loch Ness Monster in flight and on acid!

Hopefully they will fix the 12th District, and it will no longer be lampooned as one of the stupidest, most extreme cases of gerrymandering in the country.