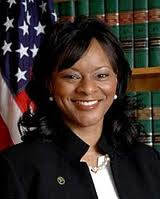 Terry Bellamy, the popular mayor of Asheville since 2005, has announced that she will run against Congressman Patrick McHenry in the redrawn 10th Congressional District. Most of the city of Asheville was gerrymandered into McHenry's otherwise safe Republican district ... apparently, just to make things interesting.
The upside for McHenry? He gets to campaign now in gay-friendly Asheville.
The downside for McHenry? He has to campaign now in Asheville.
There will apparently be a Democratic primary in this race, since there's another announced Democrat already running. And, of course, McHenry will have his own primary, as he always does, against one or more Republicans who don't cotton to Little Patty for one reason or another.
Posted by J.W. Williamson at 11/15/2011 11:16:00 AM
Email ThisBlogThis!Share to TwitterShare to FacebookShare to Pinterest
Labels: Patrick McHenry, Terry Bellamy

Patsy Keever has also said she might run, but that was before these more recent developments.

I think Patsy is still considering a run. I don't know the mayor, but has run a congressional campaign against Charles Taylor. She can raise serious money, and I think she's a very strong candidate.