Seeking an Audience with a Gun 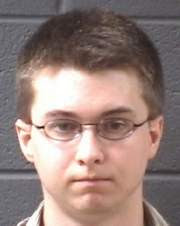 A 23-year-old Ohio man was arrested at the Asheville airport yesterday as the President's plane was taking off. He was wearing a Springfield XD 40 handgun and had been, according to investigators, monitoring police radio from his car. When he got out of his car, he was talking on a hand-held radio attached to a remote earpiece. His driver's license proved to be invalid. "Officers also found a siren box under his steering wheel, several pieces of paper with agency radio frequencies written on them and a sticky note in the cup holder with rifle scope formulas on them." The man told police that "he heard the president was in town. He stated he wanted to see the president."

But get this: his name, or at least the name on the invalid driver's license, is McVey. Eerie, even though the other McVeigh spelled his name differently.
Posted by J.W. Williamson at 4/26/2010 09:05:00 AM
Email ThisBlogThis!Share to TwitterShare to FacebookShare to Pinterest
Labels: Barack Obama, Joseph Sean McVey, Timothy McVeigh

This overt act of intimidation if not the assassination of President Obama is the intended result of the inflamatory rantings of Beck, Hannity, Limbaugh, and the other right-wing conservative nutjobs. Let's also put some of the responsibility onto Palin, Bachman, and our own Virginia Foxx, whose venom poison's the minds of the irrational and unbalanced.
Why have the Republican, Conservative leaders not taken the lead to calm down the rhetoric? Answer: they WANT hatred to flourish; it may win them congressional seats.

It's true BB. Their motto is "divide and conquer". Demagoguery at its worst.

No doubt this dumb kid has not fiqure out if you are going to take Air Force One down, you need a totaly professional hit team like the CIA and the hidden Dudes that did 9/11 as a inside job.......

Other than his drivers license being invalid, he doesn't appear to have been breaking the law.

If he wasn't driving, even that was not illegal. All it said was he got out of a car.

Geez - I remember when wearing the wrong t-shirt to a George Bush event would get a person thrown in the slammer.

"Why have the Republican, Conservative leaders not taken the lead to calm down the rhetoric? Answer: they WANT hatred to flourish; it may win them congressional seats." - BikerBard

You are exactly correct, BikerBard. It worked for the Democrats in '06 and '08, so now the Republicans are going to give it a try. But "despicable"??? Really???

It's ok when we do it, but it's awful when they do it, right?

Ok, I am ready to hear how the situation is different, so there can be no comparison. Let the excuses fly!

Nice effort, Mike, but it was nothing like the hatred today.

I was there. Yes it was.

I was assaulted. My life was threatened. My Constitutional rights were trampled.

The hatred then was every bit as bad as it is now, the fear mongering just as severe.

Mike D. I think we all agree that mob violence and blind intolerance is evil even when stirred up in a righteous cause, such as the French revolution or Harper's Ferry. My question for you is; what criteria can we use to distinguish justifiable anger against tyranny from xenophobic hatred and primitive mob emotions.

That's easy. If it's anger directed at our political foes, it's justifiable. If it's anger directed at our political allies, it's despicable. When it comes right down to it, we are right, and they are wrong. It doesn't matter that they believe they are right and we are wrong, because as we already know, they are wrong. So we may feel free to criticize not just their message, but also their behavior, for although we exhibit the same behavior when we fight for our cause, it doesn't matter, because our violence is justifiable, because we are right.

Hey! I wrote a post BikerBard can agree with! ;)

Mike:
I was in a number of demonstrations against the VietNam war - none was ever violent. No one ever counter-protested in favor of war.

I'm sorry if you were threatened, but it's understandable. I have wanted to wring your neck from time to time. LOL!

Seriously Mike, How would you distinguish between justified anger vs the base passions excited by demagogy? When is it right to protest and what are the boundaries?

I see a clear difference between my anger at the Bush administration and the anger of the Tea partiers. What do you think?

I stand by my satirical answer to your question.

The left saw Bush pass the warrantless wiretap provision of the Patriot Act and cried "Hitler!", but where is Bush now? Is he sending dissenters to the gas chambers? No! All the fear mongering was bluster.

Now the right sees Obama bailing out GM and the banks and they cry "Communist!", but will he truly nationalize our private industry? No! All the fear mongering is bluster.

As I said, what it truly comes down to is that you think your gripes are legitimate, so you permit those who fight for your cause to cross the line. The gripes of your opponents? Well, they are wrong, so excessive passion on their side constitutes some kind of paranoid, violent psychosis. But that's exactly the same way they think about your philosophy, that it subsists on fear and violence and indecent behavior.

You ask me to differentiate between "justified anger vs the base passions excited by demagogy", and I can give you only a one word answer that clearly separates the two: perspective.

Perhaps I should clarify:

It is not the motivation of the power of the people to protect us from tyranny that is bluster. It is the portrayal of the current situation as impending doom that is bluster.

Mike - What concerns of the right do you view as legitimate?

If it's the budget deficit, be aware that it was the right wing administrations that actually created the deficit and the reasons we are so deep in the hole right now. I argue that their concern for the deficit is phony and would immediately disappear if they get back into power.

Yes. We have seen that before with the issue of "big government." Bush campaigned on that issue, was elected, and expanded the government.