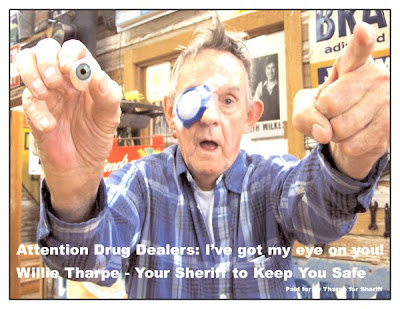 This is Willie Tharp, one of three Republican candidates for Sheriff of Wilkes County. He took out a full-page ad using this picture of himself. You can't make this stuff up.

He ran for sheriff of Wilkes twice before, in 1976 and in 1990. He told the Wilkes Journal-Patriot that he would "like to give the deputies who are working now enough of a raise so that they don't have to work a second job," and who could quarrel with the wisdom of that? Tharp added, "My main priority, though, is opening up some of these unsolved murder cases. I want to solve some of those cold cases."

Only in America. Maybe only in western North Carolina!
Posted by J.W. Williamson at 4/07/2010 07:18:00 PM
Email ThisBlogThis!Share to TwitterShare to FacebookShare to Pinterest
Labels: Wilkes County, Willie Tharp