Applause for the Forward Thinkers of Boone 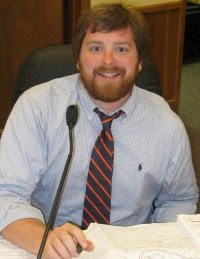 Boone Town Councilman Andy Ball took the lead with the Boone Town Council in introducing a resolution endorsing wind power as an untapped resource for a sustainable future ... in the face of a movement in the NC General Assembly to ban any commercial development of wind power in the NC mountains.

Those General Assembly folks out to kill the future of wind power -- led by Sen. Joe Sam Queen who represents Avery, Haywood, Madison, McDowell, Mitchell, and Yancey counties -- are misguided. They are wrong. They have been influenced by special interests who do not want the million-dollar views from their quarter-million-dollar decks spoiled by wind turbines.

Spoilment of the view is obviously in the eye of the beholder. To me, the sight of the ASU wind turbine revolving in the moving air is sheer beauty. It's flight and freedom ... and independence from freakin' oil.

It's also the future, or at least a large part of the future. The Town of Boone, which gets nothing much from the big wigs of Watauga County but insults and contempt, deserves accolades for embracing the future and fighting for it.
Posted by J.W. Williamson at 4/18/2010 09:46:00 AM
Email ThisBlogThis!Share to TwitterShare to FacebookShare to Pinterest
Labels: Andy Ball, Joe Sam Queen, Town of Boone, wind power

To me, the sight of the ASU wind turbine revolving in the moving air is sheer beauty. It's flight and freedom ... and independence from freakin' oil* JW

Sounds good to me! But will it fly like most Green Progressive Al Gore Grasshoppers do?

Wind power takes up a lot of space, is detrimental to the avian population, and produces little energy without supplying constant power.

It's a step in the right direction. With a determined effort, with our combined resources and focus, as in the Manhattan Project, we can develop an efficient technology using wind power among other sources.

It's a step in the right direction. With a determined effort, with our combined resources and focus, as in the Manhattan Project, we can develop an efficient technology using wind power among other sources.

It sounded so nice...
Bridle said it twice!
LOL!

We can make energy transfer more efficient, sure. But in terms of actually getting more energy from each rotation of the blades, it's not likely. Wind power is just not that useful in many regions of the US, not to mention intermittent.

In all of the "sustainability" debate, I hear little about nuclear power, aside from building a couple reactors in Georgia. There are subsidies and tax exemptions and advertisements for solar/wind power, but aside from a couple one-time subsidies for nuclear plants, there's nothing. That's what the most efficient and cleanest energy source gets: one-time political deals.

Maybe the fact that my wind-power stocks have so far returned over 400% just might change some minds!

Your STOCKS in wind power made a return...so it must mean that you can stick a wind turbine anywhere and get 400% more power than a regular coal-burning plant??

Costa Rica, which gets 99% of its energy needs from renewable and/or non-polluting sources, has a wind farm that is actually a tourist attraction: 22 huge turbines that snake along the continental divide in that country. It is awesome to see and it apparently supplies a significant (though comparatively small) share of the country's power. Google Costa Rica wind farm for more details.

Costa Rica also gets 82% of its power from hydroelectric dams; something that is not feasible for many other nations.

Wind power is something we need here in the high country. Did you know that the Town of Blowing Rock became the first town to ban windmills within town limits and extraterritorial boundaries? The Town of Blowing Rock is never called on their attempts to despoil the environment (remember the 2 fishkills on middle fork a few years back - not a peep from the environmnetalist).

Anonymous - One of the problems with nuclear power is that it requires a massive centralized infrastructure. This kind of infrastructure is good for the energy companies, because the power can be metered and controlled.
On the other hand it presents a clear target for saboteurs and terrorists to disrupt our economy. This is partly why the internet was set up in such a decentralized way.
I believe real security requires that we have a decentralized energy network, comprising various sources, including wind, solar, tidal, hydrological and anything else that we can come up with. This will be harder for the energy companies to control and profit from, but it is very dangerous to our society for companies to have too much power in any case. As we have seen recently.
(There are many other problems with nuclear power as well.)

How many nuke stations have been hit by "sabatours"? That term is a bit archaic now; just like you thinking.

How many nuke stations have been hit by "sabatours"? That term is a bit archaic now; just like you thinking.

Man up. Come on out Rico.