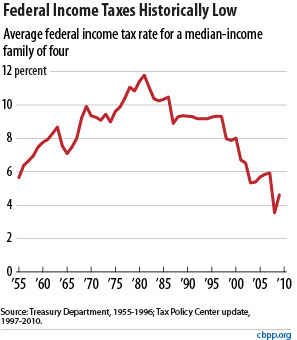 Analysis from the Center on Budget and Policy Priorities, which will no doubt be labeled now as a notorious mouthpiece for Socialism:

"Middle-income Americans are now paying federal taxes at or near historically low levels, according to the latest available data. That's true whether it comes to their federal income taxes or their total federal taxes." HT: Rob Schofield at The Progressive Pulse for putting us on to this info

It pleasures the tea-partiers no end to scream about being taxed to death, when the evidence is exactly the opposite. Our tax bill on April 15th certainly went down, though nothing else in our personal situation had changed from last year.

The tea-partiers won't hear it. Their ears are stuffed with the noxious cotton-wadding of Fox News. Either that, or they're part of the filthy rich who can and should pay more for the sake of the commonweal and are terrified at the thought of funding anything other than senseless wars against third-world enemies.
Posted by J.W. Williamson at 4/19/2010 10:01:00 AM
Email ThisBlogThis!Share to TwitterShare to FacebookShare to Pinterest
Labels: federal taxes, teabag protest

And that's averaged out over everyone that also doesn't pay any income taxes. That number has increased due to the recession.

Also, how about those tax cuts only for the wealthy that liberals were screaming about?

Here is what happens if one speaks out at a tea party rally against Sara Palin and Taxes! Insanity at it's best and republican retardation at it's worst........

If Americans are paying less taxes now than ever before, then it is the result of George W Bush and the Republicans.

Reporting this sort of shoots liberals in the foot don't you think Nonymouse? It won't last long, and the contrast will be striking.

Hussein Obama and gang will certainly raise taxes, they have too to pay for all the entitlement programs for illegal aliens, health care for the undeserving, and sabatticals for liberals who don't want to put in an honest day's work. I say let the liberals voluntarily pay the higher taxes themselves. This will never occur as the most productive individuals in this country tend to be independent thinking conservatives who have the brains and gumption to make something of themselves (as opposed to being given something by the government).

Now show Rodger what has happened to the national debt during this period of record low taxes.

Wow! Do you all hear this bullshit fearmongering?

How about Rodger and Mouse trade places with a couple of homeless people who pay no taxes? a kind of "Trading Places" film update. I think it will be the only way they will understand. Maybe not.

Now, you two trolls can go back under the bridge, put on some makeup, and wait for the director to yell, "Action!"

I don't enjoy being called names. Trolls? The fear and hate being spewed here are quite frightening. I thought the Tea Party people were violent and unfriendly. It seems as if I have it all wrong. Could be that the fringe left news media has it wrong too, and judging from the above post, it would be hard to argue otherwise. LOL!!!

So easy to turn the tables. So easy.

So, you are frightened? By a blogger? Poor, poor, Treckie.

Go back into your hole under the bridge, cower in fear, and think about the lesson learned. I don't represent anyone but me.

The worm does turn.

My American Heritage dictionary defines conservative as tending to resist or oppose change.
This is pretty much the opposite of independent thinking.

On the other hand-
Liberal is defined as political views that favor civil liberties, democratic reforms, and social progress.
It takes an independent thinker to break away the chains of the past and create a new vision.
It was the conservative minds who were afraid to abolish slavery, to allow women to vote, who didn't think humans could ever fly.
It was liberal thinking that wrote the declaration of independence, and the constitution. It was liberalism that eliminated smallpox, and sweatshops, and established free public education.
I'm proud to call myself a liberal.
If other people call me liberal, I know I'm doing something right.

You're talking about classical liberalism...that's not the liberalism of today.

Really? Then how do you explain the liberal intent to disarm America? The 2nd Amendment is a civil liberty and the liberal socialists attempt to trounce it at every opportunity.

Then we have the Fairness Doctrine. How's that for favoring civil liberties? The 1st Amendment gives us freedom (I know, I know, you hate that word) of speech, yet the left fringe Amoeboids want to limit the freedom of speech because they feel threatened by conservatives telling the truth. Liberals have no further to look than themselves to see where the problem lies. LOL!! Truth hurts doesn't it?

So now you are trying to align yourself with the Founding Fathers? LOL!! That might have been a good tactic before you fringe left types painted yourselves into a corner that you cannot get out of. Anything progressive comes from conservatives. Look at all the liberal weapons laws that are being repealed for the public good. Are liberals doing this? No. And why not? Because they are more interested in oppressing and controlling than they are in doing anything for American people.

Does being forward thinking and progressive always mean you have to take something away from those who have actually earned it (usually a conservative)? Take health care. Liberals love health care as it is yet another service they get for free without having to lift a hand. Is this the progressiveness you are talking about? LOL!!!

You ought to get a job and become a productive member of society before insulting those of us who are supporting you through hard work! I would be ashamed to admit being a lazy, entitlement program oriented, civil rights abolishing liberal such as yourself.

Oh and Cheerleader (Tricycle Lard), are you ever going to have an original thought or are you content to hide behind the other sheep? LOL!!

How's that bib working out for you?

Rodger, for someone who doesn't like to be called names, you are very quick to call others juvenile names. You sometimes make good points but I'm close to just skipping any more posts that begin with "Rodger Young said...'

Nonny-Mouse:
Just because YOU define liberalism today that makes it so?

And wow, you have such a creative and unique name! How ever did you ever come up with that one?
Tell us.

Ask conservatives to define liberalism, and you will get some very diverse answers. It always boils down to something they despise about the modern world.