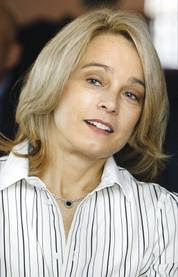 What is it with the women the Republican party is finding these days to carry their banner? Sarah Palin, Carly Fiorina, Virginia Foxx, and now Sue Lowden of Nevada, the leading Republican candidate to take on Senate Majority Leader Harry Reid.

She said, quite seriously, that perhaps the health-care crisis could be solved by patients' bartering with their doctors: "You know, before we all started having health care, in the olden days our grandparents, they would bring a chicken to the doctor; they would say 'I'll paint your house.' I mean, that's the old days of what people would do to get health care with your doctors. Doctors are very sympathetic people. I'm not backing down from that system."

This was not a gaff. This was a policy statement.

The totally foreseeable TV ad followed at warp speed. I like a dancing chicken as much, or even more, than the next guy (having known hundreds of them in my West Texas childhood), but these dancing chickens are hard to beat!

Sue Lowden is a casino owner, which perhaps makes her even more sympatico to Virginia Foxx (aside from the bizarre political views about how poor people ought to comport themselves). Foxx happens to be taking a tidy pile of campaign cash from Las Vegas zip codes.

Wow! So chickens are the currency of the Republican Religious Right?

What happen to the Gold standard as saving the day for down and out Republicans?

Go Sue Lowden. The bartering thing is much more appealing to Americans who don't want Big Brother dictating they buy services from the govt = communism.

Chickens as currency? Reminds me of the days when Reagan (blessed be His name) declared ketchup to be a vegetable. Please note the overt sarcasm.

"On April 22, The Wall Street Journal pointed out that in 2009, the American Medical Association's newspaper had referred to barter as a "creative way to collect from patients during difficult economic times", and that Kaiser Health News had said health care was becoming the "service in most demand" according to people running local barter exchanges." - Wikipedia

How many chickens does it take to equal 500 dollars for an office visit, and who gets to slaughter and pluck them?

We actually traded firewood for dentistry back when I was young and broke. But I'm too old to be running a chainsaw these days.

How many fresh morels would get me a free EKG to determine what craziness causes me to enjoy WataugaWatch so much?

Let's look at the flip-side. Who, in his right mind, would accept chickens, or firewood, or even apples as payment for services rendered? Would you? (Well, maybe Mike D. would take a bushel of morels.) Look- his hands are trembling already! :-)

Just imagine what all those chickens and mushrooms would do to the ambiance in the waiting room.

Here's Paul Krugman (NY Times) and his take about this idea.

Biker Bard, Krugman makes the valid point that no amount of chickens will cover the cost of cancer treatments, or heart bypasses. The idea of a deathly sick person having to comparison shop for the best prices is absurd. When my mother was dying of cancer for two years, she could barely deal with the basics of eating, much less handle complicated financial arrangements. The basic flaw in our system is the idea that health care can be a for profit enterprise. The profit motive will always conflict with superior care. Some things, like education, health care, and taking care of children we don't do for money. We do them in order to create a decent society.

Bridle:
Sometimes I think "Chicken Lady" and those of her kind, lose sight of the obvious. What ever could they be thinking? I hope Lowden gets paid in turkeys some day.

However, I'm sorry for your loss.

I feel Republicans have turned into chickens!