On the Wrong Side of an Environmental Disaster 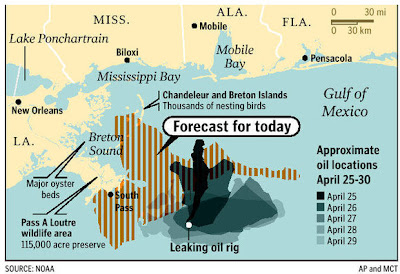 Gov. Perdue used to be against off-shore drilling for North Carolina "but in recent months has said that it appears inevitable" (N&O).

She wants more experts to advise her. Yeah, like those experts are gonna pull on their hip-waders and clean up the only thing that's absolutely inevitable ... an accident, a careless screw-up, a failure to focus on what's valuable rather than on what's profitable.

And Senator Kay Hagan? The Greensboro News&Record's Mark Binker asked her directly about the lessons of Louisiana, and only pure mush came out of Hagan's mouth. She's obviously in the "drill, baby, drill" choir, only she's now singing the chorus as softly as possible, trying to be inconspicuous in her lack of leadership as an oily environmental nightmare insinuates itself into every inlet, marsh, and wetland of the Louisiana coast.

The British Petroleum Blob has only begun its reign of terror. Still to come ... the coasts of Mississippi, Alabama, and Florida ... and, oh yeah, TEXAS!
Posted by J.W. Williamson at 4/30/2010 09:04:00 AM
Email ThisBlogThis!Share to TwitterShare to FacebookShare to Pinterest
Labels: Beverly Perdue, environmental issues, Kay Hagan, Mark Binker, oil industry

Don't worry! Help is on the way with the Republican Governor of Louisanna coming up with a new war cry to stop the Spill..

So are you saying we should not drill anywhere?

Insanity: doing the same thing over and over again and expecting different results.
Albert Einstein

How interesting that just when the decision to drill offshore, suddenly there is an explosion and spill, and the weather changes to blow from the south.

You are right, Anon. That is why they say life is stranger than fiction. And Bridle, we will continue with the insanity until we find a better way to fuel our addiction to motor vehicles. What other option do we have?

RV - The sun powers nearly every living being on this planet right now. Even the fossil fuels we are using up at such a tremendous rate are a compacted and condensed form of plant energy, which came from the sun.
A single blade of grass can convert solar energy into all the energy necessary for life and growth, with no risk of explosion, toxic spills, or pollution. We KNOW it can be done. All we need is the will.

Nicely said, Bridle. The problem is that most of you humans like to travel quite fast. A blade of grass harvests the sun's power very effectively, but it also grows very slowly. Personally, I enjoy the slower pace of life, and the mechanical advantage granted by the innovations of my bicycle are just about fast enough for me. But most people are not like me, are they?

I agree Bridle, but until that is accomplished, where will we get our oil?

The Manhattan project spanned a period of 4 years of intense research and cooperation from agencies and scientists across three countries. Nuclear power was by no means tested or even proven to be feasible. But we (humans) did it. If we can do that kind of work in the name of war, why not for the sake of peace and a future for our kids?

Mike, the sun also powers your quick movement and agile brain, and in fact fossil fuels are nothing more than condensed solar energy. The power is there, it feeds hurricanes and waves, and can certainly meet all our needs. We need to rethink our paradigms though. Very difficult for conservatives, by definition.

Sounds like we need to start hounding our congressmen about starting the project.